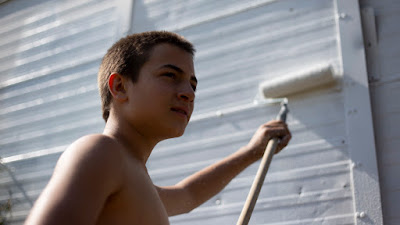 Thirteen year old Rodrigo's life is shifting. His mother has a new boyfriend and his arrival to their house means that everything about his life is about to change radically. As the new arrangement at home plays out Rodrigo drifts off and finds an abandon camper where he hangs out. He also plots if he will take things in his own hands and reclaim what he feels is his.

Good coming of age story about a young man trying to find his way in the world. It manages to rise above most films in this genre by making everything much less clear cut than we usually get. There is a complexity to the relationships that we don't usually see in similar films. Hell, in most recent coming of age films we really don't see much interaction between kids and adults, rather the adults are shadows and it's all kids who are cool.

And I am going to leave the discussion of the film here. Not because the film it is bad, it is not, frankly it is head and shoulders above most recent similar films, rather it is because this really isn't my favorite sort of genre. I like them when they are well done but my vocabulary for discussing them is limited. I tend, more so than with other types of films, to say the same exact. things over and over. This film deserves better.

Having World Premiered at Sundance expect SUMMER WHITE to be hitting festivals and theater screens over the next few months.