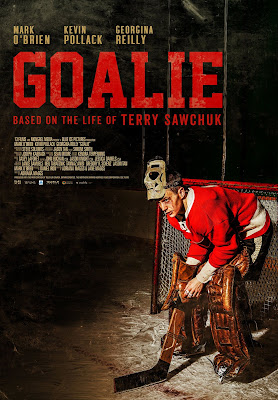 The trick with enjoying GOALE, a film about the life and career of hockey goalie Terry Sawchuck, is to just let it do what it is going to do. A decidedly atypical sports bio, the film is more a tone poem or mediation on the great one then a straight forward hit all the cliched notes one.

For those who don’t know Terry Sawchuck was a legendary goalie who played from 1949 until 1970 when he died from injuries received in drunken fight with his roommate. He started to play before their were hockey masks and as a result had a face and body riddled with scars. Even when the masks came in they were little better than playing with no masks. When he died he had won more games than anyone else and set an unreal record for shutouts that will probably never be equaled. He also won four Stanley Cups. He was a tough man who battled with depression and his wife who divorced him.

Beginning with Sawchuck’s autopsy and then jumping back through time the film charts the arc of his life. It is told in voice over by Sawchuck, by actors portraying retired players who encountered him and by the depiction of events. It is more a portrait of the inner landscape of the man rather than a straight forward accounting of all of the highs and lows of his life. Yes, the highlights are there but the film is more concerned with making us come to understand the man as person rather than a sports figure. This is not a feel good rah rah sports film- and frankly we are better for it.

I really like GOALIE. I like that it doesn’t take the road well-traveled. I like that the film doesn’t try to make the bittersweet story something saccharine. In talking to my brother, a goalie and a huge admirer of Sawchuck, I came to realize how true to the man the film was. His comments after watching the film to me was were that other than leaving out some events (and not using the actual NHL logos, probably due to cost) the only thing that they got wrong was they used some too modern equipment. It was, as best as he knows, an accurate portrait of the man, which is the point.

In reading reactions from the festival screenings over the last year I find it interesting that the people who didn’t love the film didn’t like that this isn’t a retro-coned cliché filled film. They wanted something completely uplifting, not introspective.  I suspect that these same people probably would have not been happy since to give us that would have required changing Sawchuck into a character and not a man.

Before I sum up I need to single out Mark O'Brien performance as Sawchuck. It is a wonderful piece of acting both physically and emotionally. OBrien has Sawchuck’s moves down and his journey across his arc moves us.

Goalie is a wonderful atypical sports film. If you want a portrait of one of the greatest men ever to play the game and but don’t need rah rah forced emotion this film is for.

GOALIE hits  select theaters on Friday and VOD on February 25.
Posted by Steve Kopian at January 27, 2020