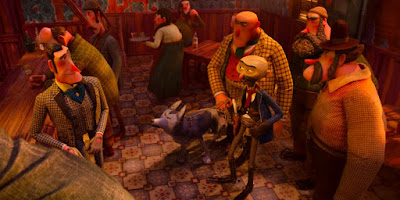 Laika's latest animated film concerns a great monster hunter in Victorian/Edwardian England who wants desperately to join an upper class society of hunters. When he receives a clue to to the whereabouts of a bigfoot he makes a deal that if he brings back proof he can join the closed society. However the head of society wants no part of him and sends a killer after him. Finding the bigfoot he is talked into trying to find a lost civilization of similar creatures in Asia. A grand chase ensues.

This may have Laika's best animation to date. The sequences are stunning and would be impressive had they been done either in computer animation or live action but the thought of them being stop motion animated boggles the mind. I'm thinking in particular of the Loch Ness Monster and the fight on the steamer sequences. It just amazing to experience.

The rest of the film is good but it never quite has the emotional kick  it should. I laughed at the jokes, and enjoyed the adventure but I never connected emotionally. Things seemed to be a bit too knowing or if not knowing artfully constructed to the point the humanity was lost. I liked everything I was seeing but I never loved it.

Regardless of my lack of emotional connection the film is a blast and half technically and a rousing adventure and as such is recommended.
Posted by Steve Kopian at January 03, 2020