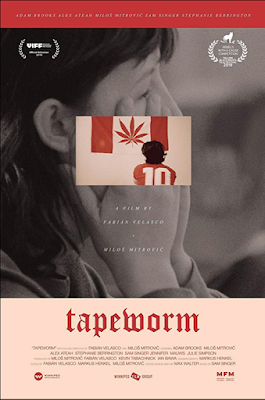 Cringe comedy or almost anti-comedy is either going to click with you and make you smile knowingly or make you want to kill the directors.

The film concerns a bunch of losers in and around Winnipeg who crisscross each other like some grand no-fi Robert Altman film. There is a guy freaked out by the blood in his stool, an unfunny comedian, a guy who stays home and plays video games, his mother and some others. It's all dead pan and uncomfortable silences.

This is the sort of humor you either like or you don't. I'm not a fan of it, largely because to me it always seems that these comedies are trying way too hard to be something clever. They rarely are, or at least as clever as they think they are. Even the early films of Jim Jarmusch which this film mirrors in tone at times, frequently crashed and burned. While TAPEWORM doesn't crash and burn, it is actually one of the better comedies of this sort, it still remains for a small audience who like this sort of thing, a group I am not in.

Worth a look for those who like this sort of thing. All others advised to stay away.
Posted by Steve Kopian at January 25, 2020