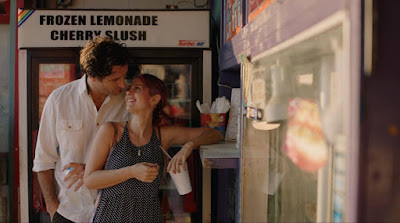 Limerance is a term describing a sudden deep feeling of affection for someone upon meeting. Think of it as the technical term for love at first sight. In Tammy Minoff‘s film it describes what happens when an artist moves to Venice California and collides with a gallery owner. The film charts the course of their romance as well as the relationship of long married friends.

A nice little film is better in the small interpersonal moments between the lovers. Tammy Minoff and Matthew Del Negro are a sweet couple and they sell the romance wonderfully. They are so good that you really want them to work out.

The problem with the film is that when the film gets away from the central couple things wobble a bit. Things can be a bit too TV sitcomish. Minoff‘s arrival at her friends house is the wrong sort of silly. It’s not bad but it’s not as good as the romance with the result the film is just good instead of being great- which it would have been if it played a bit straighter.