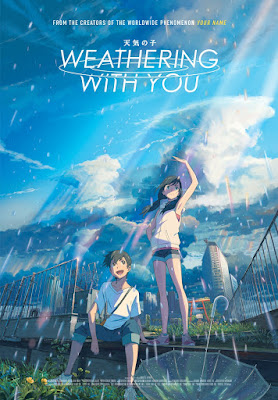 In recent years, Makoto Shinkai has carved for himself a place in anime culture reserved for an elite few, the handful of pioneers and innovators whose every release is an Event. Where once new films by Hayao Miyazaki and Satoshi Kon would dominate headlines and the pre-twitter blogosphere, now new Shinkai projects are received with similar expectation and excitement. Much of his appeal comes from his unique blend of realism and fantasy, combining highly detailed animation and photorealistic environments with wistful, storybook romances about young people in love. This tension results in a distinctive magical realism all Shinkai’s own, establishing him as that rarest specimen in the brutally bottom-line driven anime industry: an authentic auteur.

Audiences both Japanese and gaijin can’t get enough—his latest film Weathering With You became one of the highest grossing movies of all time at the Japanese box-office, beaten out mainly by Ghibli films, Western blockbusters, and his own 2016 smash Your Name. Set in a modern-day Tokyo enveloped in a bizarre, months-long rainstorm, it centers on a romance between runaway high schooler Hodaka (Kotaro Daigo) and Hina (Nana Mori), a young woman with magical powers to literally pray the rain away. They set up an online business offering Hina’s services to guarantee temporary sunshine for sunlight-starved buyers, but their idyllic life together gets wrecked when it’s revealed that Hina’s powers are slowly killing her and she’s doomed to be ultimately sacrificed to the Powers that Be.

It’s a sweet, melancholic film, beautiful, moving, and insufferable. Despite being less than two hours, it feels more than three as the film has no internal narrative structure, seemingly emulating the effortless non-story stories of Miyazaki while missing the master’s sense of forward momentum. Shinkai overloads his story with dead weight: a lengthy prologue where Hodaka tries to survive as an underage transient in Tokyo, romantic intrigue among the foster “family” that takes him in, a police investigation subplot that exists only to needlessly up the stakes in the climax, and a Shinto-based mythology that’s mentioned but never fully developed.

The film’s also mired with plot holes that wreck its internal logic, such as Hina being treated as an urban legend after being caught on video by a news crew doing weather magic. This film’s simply too soggy to live up to Shinkai’s other films, box-office success be damned.