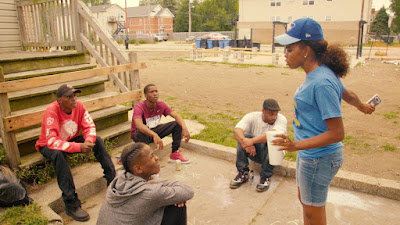 As a middle-aged black woman living in Southside Chicago, Tamar Manasseh is about as far from the traditional image of a rabbi as one can get, at least here in the United States. Loud, brash, and assertive, she barrels up the block like a small cyclone, bringing order to the mayhem of street life that surrounds her. Every day from four to eight she and a group of other local mothers set up shop in the most dangerous intersection in their community. Calling themselves M.A.S.K.—Mothers Against Senseless Killings—they form a living shield of safety in an area racked by some of the worst gun violence in America, giving the local youth a space to gather and play and eat a hot meal provided by volunteers. It’s a tense daily game of chicken with local gangs, criminals, and addicts, but Manasseh doesn’t blink. “Nobody wants to shoot anybody’s mother,” she shrugs before running off to shoo crack dealers from the nearby corner.

For most of the first part of Brad Rothschild’s documentary They Ain’t Ready For Me, there isn’t much to suggest she’s Jewish, let alone a rabbi-in-training. It’s only when we see her in a synagogue reading from the Torah, yad in hand, that it sinks in. But though her faith is initially skirted over in favor of street life vignettes, the film eventually morphs into a fascinating examination of the intersection between Jewish faith and black identity with community activism as the fulcrum. But that’s the key word here: eventually.

Though the film is a far cry from the more restrained cinéma vérité stylings of Rothschild’s last feature-length documentary Tree Man about an itinerant Québecois Christmas tree salesman living in Manhattan, he still spends large chunks of the runtime affecting an unobtrusive fly-on-the-wall perspective that betrays the film’s interest in Manasseh’s interior, spiritual life. The result is a jerky start-stop mess of omniscient street scenes and introspective interviews and voice-overs.

But still, if the sum total isn’t equal to its parts, the parts are still enough to recommend it. Whether she’s cruising the streets blaring Lauryn Hill, saving a group of terrified four-year-old boys from the cops, or visiting the graves of her enslaved ancestors, Manasseh is a mesmerizing presence, a living embodiment of tikkun olam for Black America, both Jewish and otherwise.