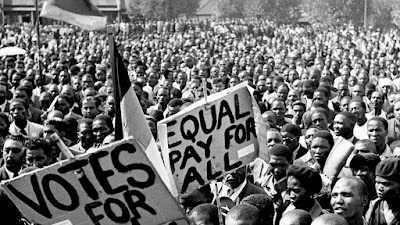 There are times when covering a film festival I go into a movie out of a perceived obligation rather than a real desire to see it. Now and again you run into a film that you see scheduled and you know you should see it but you don't really want to. Such is the case with THE STATE AGAINST MANDELA..., I didn't really want to see another film on Mandela but the description said that it was built around newly found audio...so I jumped in, and I am so glad I did.

Built around 256 hours of the 1964 Rivonia Trial where Nelson Mandela and his nine other co-defendants were sentenced to life, the film is like watching lightning in a bottle. For decades we have been  told and retold what happened at the trial, we've heard the accounts, seen recreations, but here at last are the actual voices of all the players. We are in the courtroom and we hear for ourselves what actually went down. With this film we are now witnesses to history and we are better for it.

To fill in around the audio clips, which are illustrated by stark black and white animation, we get commentary from the surviving participants who fill in the details that the audio can not provide.

This is a towering achievement. Not only is it an important historical document but it is one hell of a great film, so much so that I am considering going to see it on a big screen when it plays Tuesday.

Highly recommended. This is one of the best films at the New York Jewish Film Festival and maybe the year as well.

THE STATE AGAINST MANDELA AND THE OTHERS plays January 28th. For more information and tickets go here.
Posted by Steve Kopian at January 25, 2020