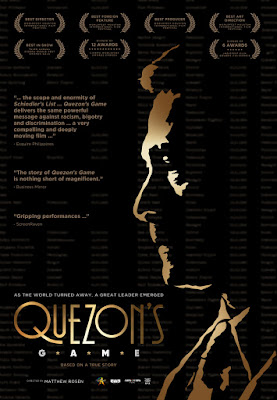 Docu-drama about Philippines by Filipino President Manuel L. Quezon who in the late 1930's and just prior to the US entry into the Second World War knew that something terrible was coming for the Jews of Europe and decided to try to help them get out. With the help of some Americans willing to take a stand, including future President Eisenhower, Quezon started to relocate them as best he could. However the bombing of Pearl Harbor changed all that.

Solid historical drama highlights an largely unknown part of history and a true hero of humanity. Quezon is a man more people should know about. Long before it was fashionable, long before people claimed they didn't know he did and he took steps to try and save as many people as he could while dodging the political problems involved.

Beginning at the end of the war when Quezon and his wife ponder if they could have done more while watching a film of the atrocities it then jumps back in time to show us the road to that moment QUEZON'S GAME moves at a breakneck pace dragging us along all along the way.

If I have any complaints at all is that for such a lavish production there is no excuse to have an SS officer who doesn't look remotely European wandering around in  an ill fitting uniform. Its a small thing but it is the only bit that bothered me in an otherwise fine film.

QUEZON's GAME opens Friday in US and Canadian theaters and is recommended.
Posted by Steve Kopian at January 21, 2020