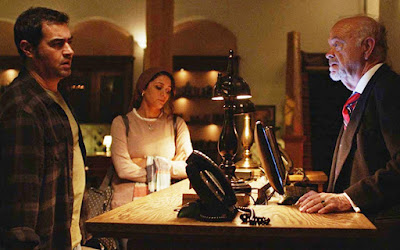 THE NIGHT is the story of a couple and their infant daughter who leave a party with friends and break down on the way home. Refusing to go back they instead take a room in a hotel nearby for the night. As the night goes on things begin to go sideways and it looks like there is a malevolent force in the hotel with designs on the family.

Kudos to director Kourosh Ahari for making a sweet little thriller. A creepy uneasy tale, the film uses silences and shadows to great effect. It also uses the fact that the film is a mix of English and Persian to further ratchet up the suspense. If you need a good example of why we need voices that are more than just white male, this film is it. While the film seems to be set in America, the mixture of cultures creates a gumbo that spices up everything up since we never know which way things are going to go.

I don’t know what else to say other than when you get a chance to see The Night do so. Get yourself a huge bowl of popcorn and beverage of choice and curl up in your seat and get ready for some winter chills.
Posted by Steve Kopian at January 18, 2020