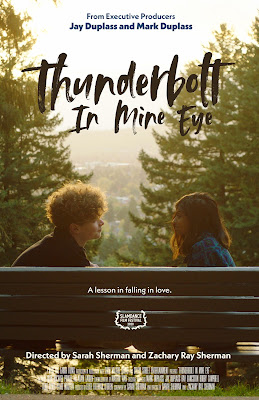 This utterly charming young adult romance maybe a little clunky here and there, but it still manages to hit an out of the park home run thanks in part to a great script by Sarah Sherman (who co-directed) who still understands the awkwardness of being 14. Gets it all the ticks down perfectly. Everyone talks about films that get the teenage experience right, but THUNDERBOLT… does it and then some. For the first time in many years I was watching teenagers, real honest to god teenagers on screen. I say this because 99 times out of 100 you aren’t watching kids, you are watching small adults. The writers write the kids as older than they are. They don’t act like young adults. That isn’t the case here, these are young kids, who are right on the edge of no longer being children but not yet adults. Key to that is the way the kids stand and act and carry one. While I don’t have kids of my own I have watched my niece and her friends interact. I’ve noticed how they stand and behave when they don’t think adults are around, and aren’t on, and this is the first time I’ve seen it on screen.

The main reason the film works is the two leads Anijni Taneja Azhar as Harper and Quinn Liebling as Tilly. They walk the line between the two worlds perfectly. We feel the uncertainty they feel at how to behave. More importantly we feel all their other emotions, the joy of first romance, the pain when it goes banana shaped and everything else in between. For two young actors they nail it. Ms Azhar in particular is glorious, turning in a quiet performance that should get her noticed (it actually should get her an Oscar nom but the Academy sadly will probably not notice).

I loved this film a great deal. It touched my heart and made me feel good.