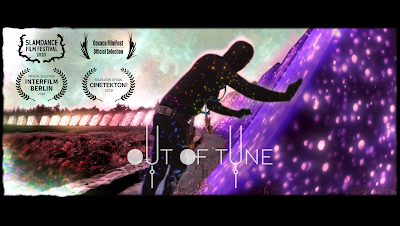 A tuner of sonic shrines runs up against vandals trying to detune them.

This experimental short film is mix of live action, animation and experimental music which re-imagines our world as something alien and quite different. It is a heady mediation on the importance, or not, of traditions and the clash between generations.

Filmmaker Aaron With has made a one of a kind film in the best sort of way. Kudos to him for doing what every science fiction film maker always claims they want to do- namely one that has a unique look and perspective on things.  Looking and sounding unlike anything else out there it is a film that forces you to engage with it.

If you want to see film that isn't like every other then see OUT OF TUNE.
Posted by Steve Kopian at January 26, 2020