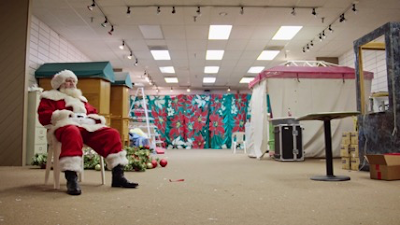 JASPER MALL is document of the death throws of a small suburban mall.

As everyone switches to on line shopping the malls of America are slowly dying. Directors Bradford Thomasson & Brett Whitcomb turns their camera on the Japser Mall over a year as the crowds lessen, the tenants leave and it slowly dies as even the regulars who just hang out wander off.

A sad slice of life  film is heart breaking on so many levels. First it’s the on screen slow motion death of the places that used to be the center of much of our existences a decade or two ago. Second it’s a clear revelation of the breaking of our social bonds. We watch as friends stop coming together. Friends who worked in the various shops are forced to drift off. As two women bemoan the eventual death of their work place- this was a place where everyone knew their name and now they will have to go somewhere else here they are nobody.

At the center of the film is security guard Mike who with the decay has become a jack of all trades, checking on the stores, cleaning, asking the homeless and addicts to leave and generally keeping the mall running. He is a tireless worker who has been given too much to do because there is no one else to do it. I feel bad for him since there is no way he can’t not know his days are numbered.

I really like Japer Mall a great deal. And while it is incredibly bittersweet, it is good time with good people and as such worth seeing.

JASPER MALL plays next on January 27.
Posted by Steve Kopian at January 24, 2020