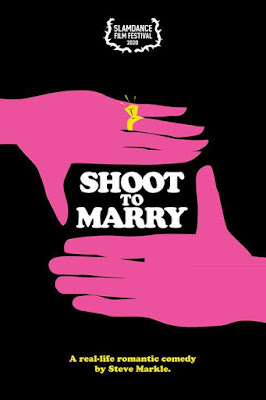 After his girlfriend dumps him when he asks her to marry him on Christmas day, he turns the camera on himself and uses it as a cover for finding and meeting women that he might be interested in marrying.

My feelings about Shoot To Marry are split. As Steve Markle says in the film it is a fantastic portrait of a some truly great women (I won’t single any out because they are all wonderful). I would gladly sit down and spend an evening with everyone of them. As long as the camera is focused on them this film is gangbusters. It is an absolute delight to listen to the women talk about their lives and feelings.

The problem is that the thread that links them together is Markle and after spending 75 minutes with him I really understand why he was single. Yes what he is saying, especially in the final 20 minutes is spot on and deeply moving at time, but he is also absolutely correct when he calls himself a nebbish and that he just won’t shut up. In regard to that last statement there is moment when he realizes that the reason that some of the relationship attempts crashed and burned simply because he didn’t really listen to the women. The fact he doesn’t shut up makes spending time with him tough…

…on the other hand the women he meets are amazing and I would love a documentary on each of them where they can just reveal their wonderfulness.

While never a bad film I am going to recommend the film because there is some truly great stuff here. Whether you love the film or are just like me and just like the film will be determined by how you react to Markle.
Posted by Steve Kopian at January 28, 2020