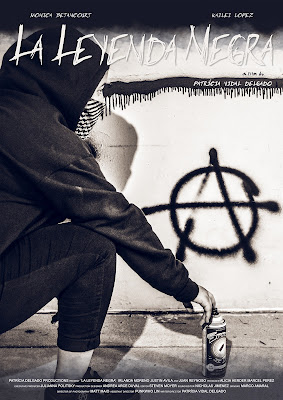 Aleteia has just transferred into Compton High School. She is an activist who is willing to fight for hr rights. She becomes friends with the popular Monica who is attracted to her willingness to actually stand for something. Aleteia's life is thrown into turmoil when her status in the US changes and she suddenly finds herself undocumented.

I am going to be up front and say I don't know if I am the right audience for this film or if it is that the film doesn't completely work.  I absolutely love the characters, the slice of life and lived in feel that everything has in the film. As a drama of the life of these characters I truly love the film. It is a beautifully acted story that hits you where you live. When it is focusing on the day to day existence of the characters it is wonderful.

The trouble is I don't know how well the politics works in connection to the story. It's not that it doesn't belong in it, it absolutely does, the trouble is that how it is handled at times seems like it is a long pained scream. Writer director Patricia Vidal Delgado is pissed off and she wants us to know but I don't know if the anger has made an organic story or if it simply is forced into the film.

When the film had ended I sat there staring a the screen feeling like that almost worked, but something didn't quite come together. The only thing I could see was that how some of the turns of the plot didn't seem quite perfectly integrated, they seemed to be there to make a point.

Ultimately though I am nit picking since LA LEYENDA NEGRA is a good little film.
Posted by Steve Kopian at January 28, 2020