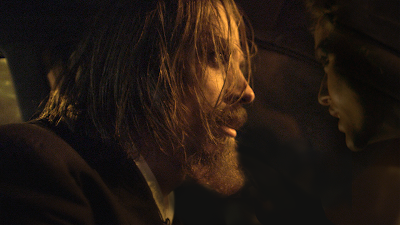 Adnan drifts in and out of madness as he stalks a long ago love and her new family.

Dreamlike and hypnotic MAJNUNI is a film that is for anyone who wants to see a one of a kind portrait of a man lost in obsession. Dark moody and in your face watching the film you are definitely all in to the head space of out main character. It is a trip to the darkside of one man's psyche. One has to applaud director Kouros Alaghband for making a film that truly makes us see, and perhaps understand, the world in way different from our own.

The film works largely because of the performance Adnan Omerović, whose haunted eyes and searching expression draws us into trying to sort out what is going on behind his eyes.

A  word of warning, this film is not for everyone. It is very much an art film. There are long passages where nothing is said, we are left to ponder what is going on and make our own conclusions. This is a film you have to work with and not  be spoon fed by. If you are up for that and willing to see something with its own look and feel than MAJNUNI is worth seeing. If you want giant robots and explosions stay away.
Posted by Steve Kopian at January 26, 2020