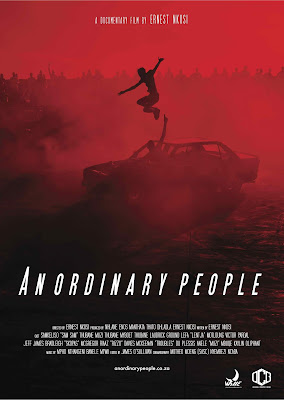 Spinning is a sport that grew out of South African gangster culture. Years ago when a gangster died his friends would steal a car, “spin it” (do circle burn outs and some crazy stunts) then set the car on fire as a means of respect. The spinning of cars grew out of that into a dangerous but truly awesome dance between man (or men) and machines. There are now competitions held across South Africa where teams compete to find out who is the best spinner.

An Ordinary People is both one of the coolest films I’ve seen this year and one of the most frustrating.

This is just a really cool looking film. The images of the spinning cars are absolutely mind blowing. More to the point what the drivers and their crews are doing is absolutely amazing on so many levels. Director Ernest Nkosi and his crew have assembled a visual masterpiece- a grand cinematic dance fil of the highest order. This film is going to stay with me for a very long time. How do I know- because I was half way through the film and I was emailing friends and relatives that they had to see the film.

The problem with the film is that it takes a while before you really have a sense of what you are looking at or what this film is about. As someone who knew nothing about the sport except from a couple of brief clips I came into the film blind and was slightly taken aback. As the film opens we are watching clips of several crews spinning cars from either inside the car or from cameras attached to one of the spinners. It is very POV and it is almost 10 minutes before we actually see what is going on outside the cars or have anyone explain to us what we are seeing. The film then slowly winds it’s way into explaining the sport, the drivers and the fans. It’s a set up that requires the audience to be patient and willing to work with the film. Even though it is clear the filmmakers know their subject backwards and forwards they should have had someone outside the sport take a look so that we outsiders have an easier path into the sport.

Reservations aside, An Ordinary People is a must see for anyone who loves motorsports and who is willing to work with the film. It is a film that will make you talking out loud to the screen as people do the most amazing things.
Posted by Steve Kopian at January 25, 2020