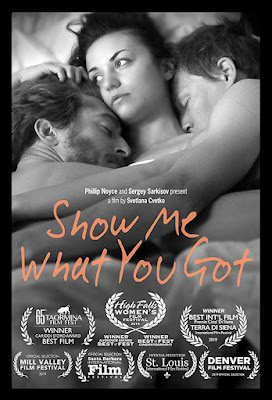 Three thirty somethings collide cross the US and Europe as they try and find out what they want from each other, themselves and from life.

Svetlana Cvetko narrative feature is a gorgeous black and white film. Every shot is beautiful enough to hang on the wall. While it is still early in 2020 I would be very surprised if this doesn’t end up on any list of the best looking films of the year.

Narratively I’m not so sure how much the film adds up to. Having a plot that echoes Jules and Jim, not to mention several other films with a trio of friends/lovers at the center, the film seems to be covering familiar ground. We’ve been here before any number of times, though not really recently and certainly never looking this good.

Part of my problem with the film is that the characters seem to be young rich jetsetters who pop between continents at the drop of a hat. They live in places that look great and probably cost a fortune. If that sounds like I can’t relate to the people in the film, you are right. I am not a young glitterati who is bouncing across the globe, nor do I really want to be. I didn’t particularly feel any connection to them. While I was moved by their story enough to watch to the end I didn’t much connect or even really care. I could admire the the filmmaking and the voice over but outside of that this was introspective navel gazing of the wrong sort.

If you love great looking but empty films give it a shot
Posted by Steve Kopian at January 20, 2020