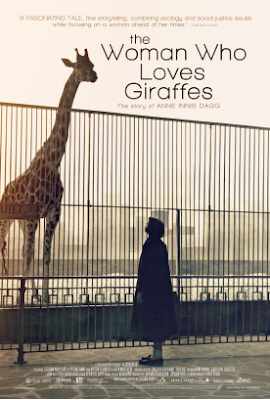 As all the promotional material says -years before Jane Goodall went to Africa Anne Innis Dagg was there doing the dame thing but with giraffes. Dagg spent years studying the animals she loved and getting abused by academia who refused for decades to accept her as one of them., turning her toward feminist causes.

Well done documentary shines a light on a forgotten naturalist whose work in the field and fighting for social causes needs to be noted. Buoyed by a central figure who is force to be reckoned with the film sucks us in early and pulls us in thanks to copious use of letters, recordings and the film footage Dagg shot while in the wild. It is one thing to be told about what a person is doing, it's another thing entirely to see it for yourself.

You will forgive me for not having a great deal to say, but when confronted with a life such as Dagg's it is often better to simply allow it to speak for itself-and director's Alison Reid's film does that and we are better for it.

THE WOMAN WHO LOVED GIRAFFES opens Friday in New York and is recomended.