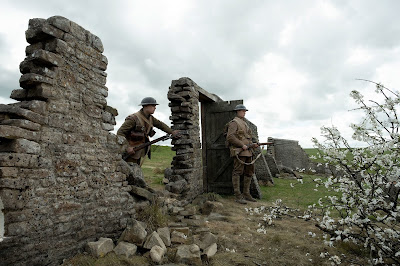 1917 is a very good film. It is a technical marvel that has been artfully and meticulously constructed. As for the rest I am going to leave that up for discussion.

The film is the story of two soldiers sent to cross no mans land and the supposedly empty enemy lines in order to deliver a message that a unit 9 miles away should not attack. The German’s have pulled back in the hope of tricking the English into attacking. In order to assure the men make the trip one of the two soldiers is a brother of a soldier in danger of being killed if the attack happens. They then head off into a series of sequences that are set up to look like extended tracking shots.

I need to state something right at the start and say that the trailers and TV commercials for the film absolutely positively lessened the impact of the film for me. I believe that every sequence is represented in them except for maybe two. If you are clever and have seen the enough of the promotional material you will begin to stitch the film together as you get to a location where something you saw happens you then write a chunk of the movie in your head. As a result I felt little suspense except in regard to the ultimate outcome.

This film dazzles with its technical achievements. It is almost impossible to know where one bit of filming begins and another ends. Sequences like the bunker and the tower obviously have places where there was a break, but in pretty much every other sequence it looks continuous. The images that Sam Mendes and Roger Deakins have created are truly amazing- with the night time sequences of the flares and burning village truly jaw dropping. They are something that will haunt me to my end days.

Beyond the technical I’m not sure where I stand.

And at this point I need to warn you that I am going to discuss some SPOILERS so if you don’t want to know stop reading.

As I said at the top the commercials wrecked tons of suspense by revealing way too much. Additional knowing the film is “one” tracking shot makes it clear that at some point that one of the two soldiers falls by the wayside. You can’t not realize that when several sequences in the commercials only show a single soldier. As to what happens, you’ll have to see the films.

As to the tracking shot it’s a nice trick but on an emotional level it is kind of limiting. Because the film starts and we were moving I didn’t really click with the two men at the center. Frankly it wasn’t until the farm house that I was fully invested. I think the reason I was not fully invested is that until that moment the men are not really involved in anything that is happening. They are simply moving through the landscape with no real connection to anything happening. The earlier bunker sequence while harrowing, seems outside of them. It is not something other than landscape. Once they get to the farm house and they see the dogfight and the plane crash they are finally characters not props being moved. From that point the the characters move in and out of the film depending on what they are doing – at this point it is more than just moving or running its occasionally magical but ultimately the constant forward motion of the camera, even when no one is moving, kind of works against the film. I know it’s a documentary approach, and its good on some levels, but it is also distancing since we have to wait,until the farm house, to find out who the men are and why we should care beyond they are the center of the film.

Adding to the emotional limiting factors is the fact that the camera is largely a distance away from the men at the center of the film. We never really get into their face. Cinema shows us the big and the small. It is the juxtopostioning of shots of distance with close up that create emotion and mood. In moving through the vast landscape and keeping the men in the center of it, even if it’s a narrow trench or tunnel, there is a loss of closeness. We are not there with them but distant. That may work out of necessity in the theater, here on the big screen where the manipulation of images create the intimacy that being in a theater with the actors creates. Here the eternal distance to the protagonists keeps us from several steps away… we are following them but we are not with them because we never “touch” them until the final shots.

The film also suffers in that ultimately other than the motion not a great deal happens. While this is definitely keeping in what a trip like this would be like, one some level it isn't engaging because there are long sequences where nothing is said. Since we don't have fully formed characters for a chunk of the film we are just watching people walk for two hours. I completely understand how some people who have seen the film have complained that the film is like paint drying (I don't agree but I understand). Perhaps this is a result of the trailers and commercials promising more, perhaps not, but there are perhaps too many quiet spots that border on dead spots.

I’m not sure why we need the ultra brief cameos of Colin Firth, Benedict Cumberbatch and Mark Strong. I understand that Firth has the weight to carry the importance of the mission, and Cumberbatch signals the end. But they really didn’t need to be there. Mark Strong is note perfect as an officer met on the road and he disappears into the role, but it could have been a random actor who could carry himself with stature.

Watching 1917 I found I admired it, I was moved along by the story but I never was connected to it.

Reservations aside the film is very good- I just don’t think it’s as great as people are making out, at least on a technical level.
Posted by Steve Kopian at January 12, 2020