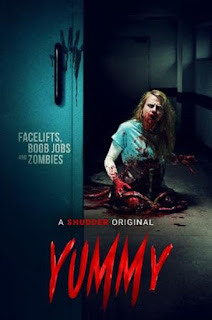 I haven't had a chance to see many films playing Fantasia yet but YUMMY is probably going to be near the list of the festivals goriest and bloodiest films. This horror comedy is as blood soaked as they come. And its gore effects are positively revoking making a must see for anyone who loves that sort of thing.

The plot of the film has an ex-medical school student, he washed out because he hates blood, taking his girlfriend and her mother to a cut rate hospital for cosmetic surgery in the Balkans. As the women get ready for surgery our hero wanders the halls. WHen he sees a young woman strapped to a bed seemingly in medical trouble- he tries to help- and thus the trouble begins because is was no longer alive but a member of the living dead...

Hitting the sweet spot of comedy and horror YUMMY is a great deal of fun. Managing to breathe a little bit of life in the zombie genre it  manages to keep things moving along by giving us some laughs, some good characters and enough blood a visera to make even the most hardened gore hound to choke on their popcorn at some point.

It may not be high art but I  had a blast.