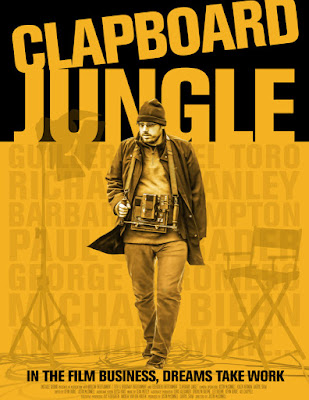 If you want to make a movie then you need to see Justin McConnel’s CLAPBOARD JUNGLE. One of the best films on film making I’ve run across, it is bracing wake up call for anyone who has ever thought of making film. My advice is don’t think about making a film until you see this film.

While the film is one part a biography of McConnell the film is really an exploration of the film business. It primarily focuses on the independent portion of the industry, but at the same time it does reflect on the larger studios as well through the numerous interviews with the various filmmakers McConnell speaks with (Guillermo Del Toro for example). This is a film that will prepare you for disappointment and a potential loss of your investment, as well as the highs of success..

Started several years ago by McConnell as a means of chronicling his adventures in filmmaking, it really shows the emotional and financial rollercoaster that filmmaking can be. We watch as projects some together and then implode,, or not come together or come together to not make money or get noticed. We see the nasty emails sent by people who don’t like the films he makes. McConnell lays it all out and we are better for it since it gives us a real sense of what it is like in the trenches.

And before you think it's all negative, we also see what happens when a film comes together and becomes a success. We watch as McConnell decides to make his film LIFECHANGER and the course it takes toward success. Things can work if you are persistent.

What I love about the film are all of the interviews that fill the film. From Guillermo Del Toro, Richard Stanley, Barbara Crampton, Paul Schrader, Tom Savini, George A. Romero, Gigi Saul Guerrero, Frank Henenlotter and other masters of cinema tell it like it is. And while there is no doubt that you’ve seen interviews with many of these people before you’ve never seen them speak this frankly. I suspect that the reason we are getting really good and informative answers is because McConnell knows the right questions to ask. He is an accomplished filmmaker talking to other filmmakers about how to make a film so they know and respect him and don’t sugar coat it because they don’t need to promote their latest film.

This film is a stunner. I was so floored by the film that half way into the film I paused it to email McConnell to tell him how much I liked the film and to ask him for an interview (that's coming). I then went back and finished the film.

One of the great films on film I've ever seen not to mention of 2020, CLAPBOARD JUNGLE  is a must see
Posted by Steve Kopian at April 16, 2021