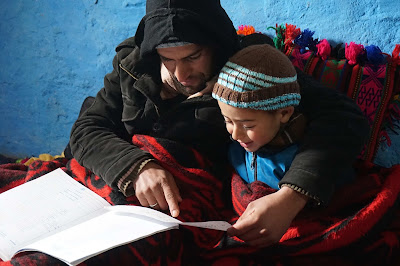 The Oulad Buokais tribe in Morocco is one the last nomadic tribes. Almost every other tribe as given up the life because of over decade and a half of drought. Wanting to better the lives of their children they build a small school house and bring in a young teacher. Over the course of the film we watch how the students and teacher bond and how the teacher works to give the kids a better future.
I was moved to tears by this film repeatedly. There were so many moments where we see, I mean really see how educating our children brings hope for tomorrow. And don't get me started about the early scene where the teacher has to explain what hope is. The whole exchange just got me in the gut.
I love this film a great deal. Its a magnificent film that puts us very much in a place with the people on the screen. Its a film that really feels like real life in a way that many documentaries never achieve. Credit director Mohamed El Aboudi with giving us a real sense of where the school is and who everyone on screen is. Most documentaries never achieve that sense of place and sense of people.
Wow. Just wow.
I don't know what else to say other than SCHOOL OF HOPE will give you hope and make you feel good.
Highly recommended. This maybe my favorite film that I've seen that is playing Hot Docs.
Posted by Steve Kopian at April 30, 2021