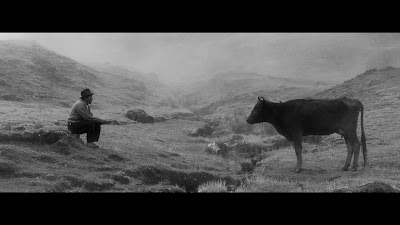 This is a stunningly beautiful film about a man and his cow. Set high in the Peruvian Andes the film is the story of a solitary farmer who thinks his cow will bring him happiness if he can just manage to sell it.

Largely told in long beautifully composed black and white shots, the film this is a film not just about the narrative of the farmer but also about the isolated existence of the people who live in the mountains. As we see in almost every shot, there is no one around for miles and living in the mountains solitary existence.

How you are going to react to the film is going to depend upon how you feel about a film told in a series of long takes in which we are kept, largely, at "arms" length from the action. I liked  the way the story was told and I was carried along, thanks in large part to the incredible widescreen images. At the same time I fully understand anyone who needs constant action and motion is going to be asleep rater quickly.

If you want to see a film whose images will haunt you all year then SAMICHAY: IN SEARCH OF HAPPINESS is a must.