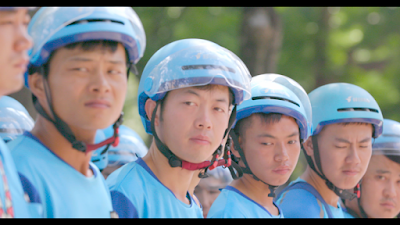 THE GIG IS UP is a look at the "gig" economy where people work on their own schedule for services like Uber, Lyft, Doordash, Amazon and other companies. Its a film that looks at the the pros and cons of the new way of doing things.

I'm not too sure what I think of the film. The film is a very good primer on the subject of the gig economy however there was a certain point where I kind of wished it was telling me more and bit more focused. For example the film's uneven focus is the result of the film bouncing all over the globe. We are in China and America and France or somewhere else. All of the work is kind of lumped together with the result that we don't get a sense of what everyone is doing or what each job entails. I felt a bit out to sea because I never had any sense what exactly some people were doing when they were sitting at a computer.

Frankly my reaction was simply "okay". And it left me with a desire to see another better organized film to put this one into perspective.