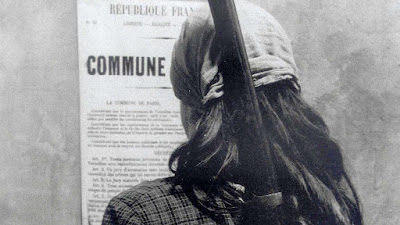 Peter Watkins recreates the short lived Paris Commune which sprung up after the government fled the city after the Prussians invaded. The central conceit is that all of the events are being broadcast and analyzed by two TV stations one for the official government and one for the commune.

Massive (there are over 200 speaking roles) and very long (it's six hours)  LA COMMUNE is either going to thrill you or bore you. This is everything you wanted to know and more, how you are going to react is dependent upon how you react to the endless interviews with the people on the street. This is a film about how events were viewed by the masses and we get a healthy dose of that.

I'm not going to lie, my interest came and went. I really don't know why this had to be six hours. I was overloaded. On some level I think the rave reviews for the film are simply critics being bludgeoned into submission.

Frankly this is a film I admire more than I like.
Posted by Steve Kopian at April 07, 2021