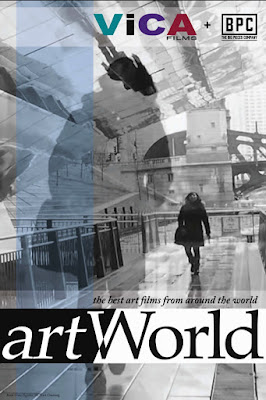 (March 31, 2021/Los Angeles) The Art/World Collection is presented by VICA Films in partnership with veteran industry principals The Big Pieces Company, a curated selection of documentary, narrative, art and experimental films from the visual and performance art world including music and dance. The Collection premiered on Vimeo on March 30, 2021, and will be available on other platforms as new deals are announced.

Filmmakers from around the world — whether just beginning their careers or dedicated masters of the medium — have procured international distribution with two companies that focus on the filmmakers first.

The films are partly chosen from the Fine Arts Film Festival (FAFF) Official Selections and Award Winners which is curated by the Venice Institute of Contemporary Art, sponsors of FAFF, now in its 8th year June 8-14, 2021 on Vimeo.

A partial list of the Art/World Collection which premiered March 30:

A beautiful and engaging focus behind the scenes at the Municipal Theater in Chile where the technicians produce the magic of the shows.

On the Track of Robert Van Gulik (Belgium), dir.

Robert van Gulik is one of the world's most popular Dutch writers, but relatively unrecognized in his own country.

Explores how chronic illness facilitates different kinds of artistic production and acts as a creative catalyss, as seen through the lives of four artists.

But I Love the Zine (USA), dir. Fiona McDougall

Revealed is the resurgent San Francisco Bay Area culture of zines – artistic publications that are self-made, accessible, intentionally tactile — and not on the Internet.

Experimental short about a common housefly.

“Blind” is not the inability to see, but the alternative existence of something once in visual form, just as “the existence

Featuring choreographed acrobatics set to piano, this film represents Icarus' state of mind when he was in confinement.

A chance encounter leads throughout the city. Do we root for the guy - or the girl…or both? Is it real?

With an overlay of heightened reality and fantasy that is both familiar and unexpected, this fun and quirky film tickles the limits and folly of understanding.

Tip Toland is a courageous ceramicist and sculptor featured in major collections across the country, including the Metropolitan Museum of Art. This is the story of her life, through the good and the challenging.

Napoleon Sarony, a 19th century pioneer of photography of celebrities such as Oscar Wilde, Tchaikovsky,

Sarah Bernard, and Mark Twain, his life is compared with three present day photographers as they wrestle with art and commerce.

This Super 8mm black and white film follows award winning artist Selina Mayer one cold November morning as she faces the dilemma that her photographic images of the nude form will find altered meaning once they reach the viewer.

Lisa Adams: As It Appears to Be (USA), dir. Juri Koll

Lisa Adams life and work as a painter as she battles the complexities of eyesight issues and the art world.

About The Big Pieces Company

The Big Pieces Company is a leader in the licensing, marketing, and distribution of motion pictures in all media. Through our extensive global sales and distribution channels, the company is able to reach viewers and fans worldwide. Bringing films of all genres and formats to market, the company maintains successful partnerships with broadcasters and independent film distribution companies throughout the world, ensuring success for every acquisition.

ViCAFilms is part of the Venice Institute of Contemporary Art (ViCA) an arts organization devoted to identifying, protecting and sustaining the unique stories, history and culture of one of the most important centers of American independent artistic expression. Through its exhibitions, events, film screenings, research facilities, and education curriculum, ViCA celebrates the world of art internationally, and most importantly the art and culture of Venice Beach/Southern California. Our founding in 2011 marks an ongoing commitment to our community - to present the art world from the perspective of artists, writers, curators, collectors, and the art viewing public. veniceica.org @veniceica

The Fine Arts Film Festival (FAFF) is dedicated to showing selected films from around the world about art, photography, collectors and artists of all mediums in and out of their studios, galleries, museums, public art, and alternative art spaces. Featuring exceptionally creative and important films about art, artists, and the art world - many premiering for the first time in the United States - from every corner of the globe! https://www.veniceica.org/fineartsfilmfestival

Email ThisBlogThis!Share to TwitterShare to FacebookShare to Pinterest
Labels: VICA