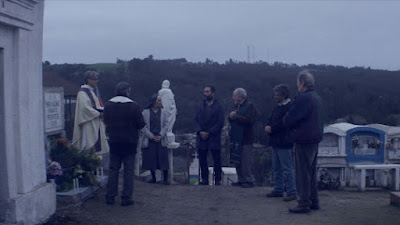 This film will kick you to the curb.

It's a damning look at the Catholic Church and the evil that priests do as revealed by a bunch of priests who are being warehoused in a small coastal town in Chile. They are there because of what they did to children. Locked away they go through their days kept away from the other villagers and controlled in a strictly regulated manner. Their only outlet is training a greyhound for a race. One day a new priest arrives and before he can barely even sit down a young man claiming to have been abused by the priest stands outside and begins to shout graphic details about what happened to him. Everyone is terrified about being found out-when one of the men produces a gun and tells the new priest to go scare the shouting man - he does go outside and shoots himself.  What happens in the wake of shooting is the film.

Billed as a darkly comic film, all humor is choked out of the film in the first 20 minutes as a the screws are turned and it all becomes more and more harrowing. By the time the black humor arrives with a crisis counselor there is nothing to laugh out at only pain and suffering and the urge to get sick. If the film is flawed in any way it's that it's just not funny despite a couple of attempts at uncomfortable humor.

I don't have words beyond this film will rock your world. An absolute must see-but only for those with strong constitutions.