OTTOLENGHI AND THE CAKES OF VERSAILLES. (2020) hits VOD tomorrow 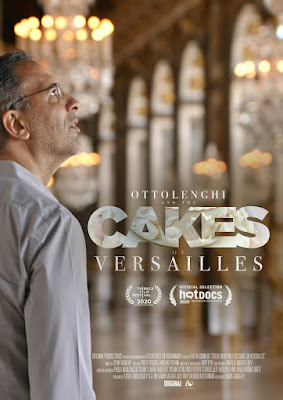 Portrait of chef Yotem Ottolenghi and his work to prepare a food gala based on the Metropolitan Museum of Art's  exhibit “Visitors to Versailles". We get know Ottolenghi and then watch as he chooses other chefs to help him and then their work putting the show together.

Every couple of years Tribeca programs a film on some event or another that the Met held. Almost always the films are great looking puff pieces that are the cinematic equivalent to a large coffee table book. OTTOLENGHI AND THE CAKES OF VERSAILLES is no exception.

A largely good looking film that clues us in on an event that tried to be as extravagant as was Versailles itself there didn't seem to be a hell of a lot to hang my hat on as a bunch of very clever chefs worked in  fancy kitchens to make food most of us could never have.  It's all really clever but there is no connection to life only to an artifice and the nuts and bolts of pulling off a fancy idea. Normally I am a food film junkie but I lost interest early and it never came back.

It doesn't help that the film's framing bothered me. I watched the film twice, once on the Tribeca site and once on a screener that was sent to me and many of the images looked wrong. Seeing them on a big screen kind of hurt my eyes as if we were too close. When I played the images on a smaller player about the size of a cell phone I found that the images looked good, but once I bumped them up to full screen they looked wrong. I'm curious if either the film was shot on a cellphone or edited that way. Then again I've seen several films shot on an iPhone but you could never tell unless you wee told.

You may like this put to me this is a great looking cinematic that tastes stale once you bite into it.
Posted by Steve Kopian at April 26, 2021