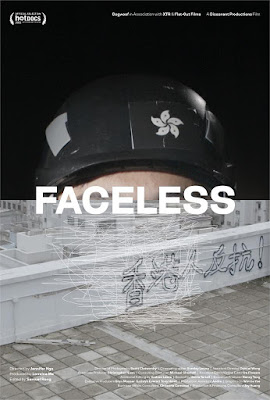 There have been a lot of films on the demonstrations in Hong Kong protesting the crushing of democracy and free expression by the Chinese government. There have been all sorts of fly on the wall films that have put us there and in the moment, revealing the terrible things that the police have done to those wanting freedom. Into the mix comes FACELESS, a look at four people who wade into the demonstrations after the mainland authorities circumvented the local laws and made the potential cost of speaking out life in prison.

The catalyst for the events in the film is the deportation act which says that if you protest you will not be tried by the local courts in Hong Kong but you will be transported to the Mainland where you will be tried and sent away for life. The film follows four people who step up and wade into the demonstrations despite of the danger to themselves.

I really liked FACELESS a great deal. Where almost every other film on the pro-democracy protests takes an in your face shaky participant cellphone approach that puts you in the moment, FACELESS is a bit more polished. Its a film that very much puts us in the moment, but it also gives us and the people on screen time to reflect. We get to hear the words of the people we are following when they aren't in the thick of battle but are considering what has transpired. Its a small touch that lifts the film up from being one of many to being one of one.

FACELESS is playing at Hot Docs and is recommended