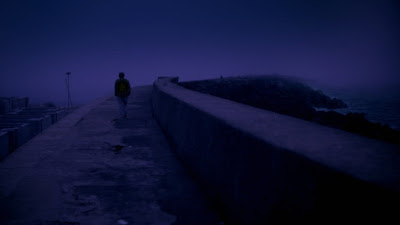 This dreamlike narrative borders on being a documentary as we follow Cebaldo as he drifts from Portugal through the cities and wilds of Panama.

As the film opens Cebaldo is living in Portugal where he works on a fishing boat. haunted by thoughts, images and sounds of home in Panama he decides to travel home.

Less a narrative than a portrait of one man and his feelings of home PANQUIACO sucks us in early as we wonder what we are seeing. Open matte images of indigenous people fill the screen. The film then shifts to Cebaldo and his life far from home. We watch him going through his paces and talking to friends and co-workers. Its an intriguing slice of life where his past is constantly calling to him.

I fell into PANQUIACO. I loved its dreamlike quality and gladly went along with its travel deep into the subconscious. I was carried along by its images and thoughtful probing of how we can never leave our past behind. I liked the film so much that when I finished the film I started it again  before heading off to my own dreams for the evening.