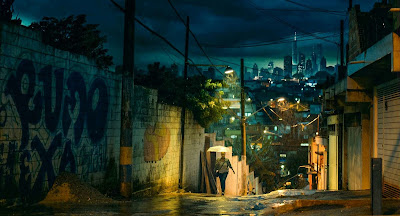 Art house meets grindhouse in a film that will satisfy few except those who will believe the WTF turns.

Ana is hired by an expecting single mom to be a live in helper before the baby arrive and then a nanny after.  Things go along swimmingly until Ana begins behaving badly when the moon is full. That is nothing compared to what happens when the baby arrives.

Solid first hour is a really good, if slow, domestic drama of the life and budding romance between the two women. Sure there are hints at what is to come but it's kept largely low key, even if a cat meets a bad end. The film is a compelling drama where you care about the characters and want to see where it's going.

That all changes when the baby is born and the film morphs into  a not quite a horror film crossed with a not quite a Beauty and the Beast drama. Picks up seven years later when Ana is raising the now young boy. Here the film wobbles from pillar to post as it never quite manages to get the tone right. The needing to keep an eye on the boy and his diet, especially at times of the full moon never really works and I kept wanting to ask all sorts of questions about the whys and hows. Things completely fall off the table in the closing minutes when a mob with a modern take on flaming torches appears. I damn near fell on the floor from laughing.

While I know and appreciate what the film is striving to do I don't think the film achieves it. Part of the problem is the fact that this film is 135 minutes.  Its simply way too long. Because we get so much set up the split between now and seven years on makes the film play like two different films with the same casts. The shift is so radical that the film can't really handle the tonal shift.

Then again perhaps the film doesn't know what the tone is supposed to be- Horror? Drama? Fantasy? The first hour is most certainly a thriller but I'm not sure what the second is.

While I have all sorts of plot questions regarding the second half I'm going to focus on two upfront things that don't really help the film. The first is that Miguel Lobo as Joel, the wolf boy, is very uneven in the role. Yes there are times when he nails it, but some of the monster related stuff doesn't quite work, We can see him acting. Certainly he's game but either because of his ability or the editing I never bought it.

The other problem with the second half is in the creature design which is much to cute and cartoony to ever be believable. I chuckled every time I saw it. Frankly I could have accepted it in if Joel was more human and not so wolf like, but he's a wolf with a cute kids face stuck on it its just silly. Worse it doesn't really match up with the new born version we had seen earlier which had a larger snout.

I probably should also pick on the plotting in the second half which has all sorts of problems, not to mention angry townspeople storming with torches, but somehow I find that too easy a target. There are too many points that seem like they were lifted from other films. If they can be lazy in how it cobbled together the various bits from other better films then I can decide to be lazy and not to take it apart piece by piece.

Forgive me I've seen way too many horror/fantasy/genre films. I've seen good and bad. I've forgiven a lot of bad films because they managed to provoke a reaction and set a mood. While I tend to love films that turn out to be about something other than what you think going in, I really hate it when they don't work. Great flips make sitting through questionable moments worth it. A bad story flip makes it all just a waste of time. Despite a great first half and a sputtering second GOOD MANNERS is a waste of time.