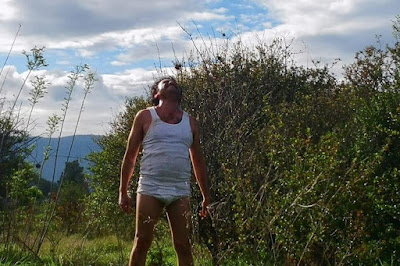 Julio Hernández Cordón's free form film is kind of impossible to classify as to what it is. A self aware film that has to director's daughter wandering trough various vignettes where Francisco Barreiro plays nine or ten different roles, the film talks about the history of Mexico, the area called Texcoco, his family and werewolves.

Kind of feeling like many covid projects I've run across in the last few months, but in reality something that was shot earlier during Cordon's daughter's school vacation (the film played some fests early in 2020) this is a film that feels more like a goof than something serious. I don't mean that in a bad way since the film entertains and has some interesting things to say about the various subjects it covers, rather I mean it just feels like a bunch of friends and family screwing around to fill time. I say this partly because we have the multiple roles of Barreiro and partly because it kind of feels like its a bunch of scenes shot on the fly.

Truth be told I genuinely like the film. I had a good time watching it but I'm not going to pretend that it is anything other than a footnote film. Sure it has some interesting things to say about Mexico and family and werewolves, but at the same time the construction makes it feel slight. Still I laughed and smiled and pondered which frankly is enough.