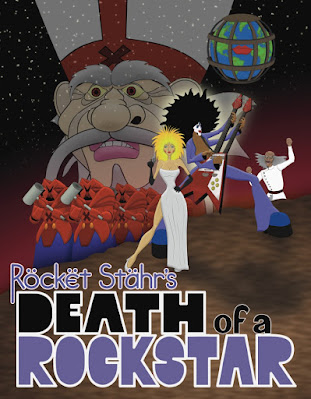 In the future when rock and roll is banned, a scientist clones a rockstar in the hope of sparking a revolution but things go wrong.

I'll give writer director Rocket Stahr points for trying but I won't give him much more because while DEATH OF A ROCKSTAR isn't DOA it really doesn't work. A rock musical, where the music really is heavy metal rock the film suffers from the fact that the vocals are of often of the screaming variety. The result is it is often difficult to know what exactly is being sung, a fact Stahr seems to acknowledge by having most of the lyrics appear on screen in cartoon balloons. It grows tiring fast and coupled with the limited animation style the film never really connects.

While I find bits of the plotting interesting and the visuals often arresting, there just isn't enough here to make it worth seeing unless you are an animation junkie.