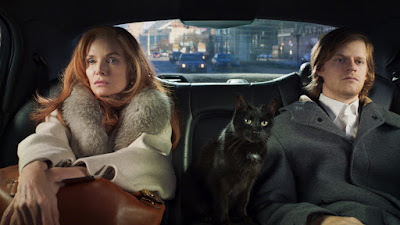 With FRENCH EXIT opening Friday here is a repost of my NYFF review from last year
I did not like the New York Film Festival closing night film FRENCH EXIT.  Blame it on Donald Trump and his family, but I can’t feel anything for a rich spoiled woman whose life, goes into the shitter when the money runs out. Why should we care when she skips to France with her son and her cat (which now has her husband's spirit in it) to stay in a friends apartment and try and sort things out? These are not problems that anyone except rich people would have.

Apologies, but a rich lead character who is largely unlikable, despite efforts to show her changing over time  reminded me too much the family in the White House. While I should have tried to separate politics from  the film seeing the film in a week where an obnoxious rich son of a bitch spent other people's money to get treatment most people in the world can't afford, only to say that cure is available to everyone (who can afford to pay for it)  put me into no frame of mind to see a similar character on screen.

This is the wrong film coming out at the wrong time.

More so since the film on its own terms the film isn't very good.