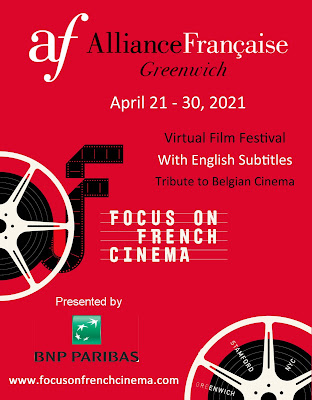 Celebrating its 16th edition, Focus on French Cinema, the annual Francophone film festival presented by the Alliance Française of Greenwich, CT will screen 10 premiere films in French with English subtitles from April 21- April 30, 2021. FFC 2021 will feature the CINEMA OF BELGIUM with 2 US premiere films as well as an exciting lineup of 10+ feature-length films in 10 days, including 6 U.S. premieres as well as multiple César and international festival nominees.

“It was terribly disappointing to cancel last year’s Focus on French Cinema. We knew an in-person festival wouldn’t be possible and we didn’t have enough time to produce a virtual event in 2020. When it became clear that moviegoing would be put on hold for many months, we moved into high gear to plan for the virtual festival that will launch April 21” said director of programming, Joe Meyers.

“We have drawn from other virtual festivals - such as the one our longtime Canadian partner Cinemania produced last fall - to come up with an Internet platform that will make it easy for our patrons to attend Focus on French Cinema in the comfort of their homes,” Meyers stressed.

“These days, people are swamped with streaming options. Sometimes we’re not sure what to watch out of the hundreds of choices available. The programming committee has worked hard, sifting through dozens of films for many months, to make it smart to choose Focus on French Cinema because we have seen and can endorse every film. We are very proud of the curation we are providing with our first online festival. I think this is one of the strongest collections of movies in the history of Focus on French Cinema,” Meyers added.

The 16th edition features a slate of newly released feature-length films including dramas, intimate thrillers, documentaries, family films, coming of age stories, hilarious comedies, LGBTQ dramas, and passionate love stories. All of the films in the 2021 edition clearly define the climate of film making in the current COVID-19 environment.

“One of our hallmarks has been finding entertaining films that also speak directly to important contemporary issues. In that spirit, we are presenting ‘Madly in Life,’ a very funny Belgian film about adult children coping with their aging parents; a marvelous drama, ‘Slalom,’ about the insidious power coaches can have over Olympic level athletes; and ‘A Good Man,’ about coping with being trans and trying to create a new kind of family,” Meyers pointed out.

“A highlight of the festival for me is the latest film by one France’s greatest living directors, Francois Ozon - ‘Summer of 85’ - a totally original take on the coming of age movie that seems destined to become a modern classic,” he added. “For fans of non-fiction filmmaking, we have the U.S. premiere of a wonderful documentary ‘Aznavour by Charles’ that explores the life and work of the great singer-songwriter and actor through the home movies he shot for many decades.”

“As always, we have done our best to present a balanced slate of films that includes drama, comedy, thrillers and family entertainment. There is truly something for everyone this year,” Meyers said.

Alex and Noémie, in their thirties, would like to have a child. But their plans are turned upside down when Alex’s mother, Suzanne, the Director of a contemporary art gallery in Brussels starts doing crazy things... It’s because she has contracted ‘semantic dementia’, a fatal neurodegenerative disease that affects her behavior. She spends lavishly, pays nightly visits to her neighbors to eat sandwiches and cut their hair, steals cars and makes herself a fake driver’s license with glue and scissors. Suzanne the mother becomes Suzanne the unmanageable kid.

A strange school of parenting for Noémie and Alex.

Three social media victims declare war on the tech giants because they are unable to cope with the absurdities of technology, bureaucracy and their own idiocy…

“Anarchic French filmmakers, Benoît Delépine and Gustave Kervern skewer the absurdities of the digital age in this slapdash sendup of so-called modern convenience”

Jim, a barely teenage boy who is passionate about science secretly builds a hot-air balloon as part of a school science project with his friend Emma - all to prove to his father, an astrophysicist, that even after the tragic passing of his mother, anything is still possible. As both kids set out to imitate Joseph Kittinger’s famed Project Excelsior, which saw him jump from the stratosphere to test high-altitude parachutes, their adventure begins to verge on the dangerous side. Set in the 1980s, in the very same year the tragedy of the Challenger Space Shuttle took place, the film is described as having a “Spielberg-esque touch.” (Cineuropa)

Benjamin and Aude desperately want to have a baby, but when they find out it is not possible for Aude to conceive, Benjamin, a trans man, comes up with another plan to solve their dilemma. Aude (Soko) a former ballerina, and nurse, Benjamin (Merlant) have been together for six years when their desire for a child reaches its peak. There are, however, two problems: Aude can’t have children and  Benjamin is about to undergo sex reassignment surgery. Benjamin decides to hold off on the operation and further hormonal treatments until he has carried and birthed their child.

1949. Brother Jean, a progressive and exceptional teacher and passionate amateur archaeologist an a school for boys in Charlevoix, Québec, plans to conduct excavations with his students to prove the presence of a Viking settlement, the famous Vinland of Norwegian sagas along the shores of the St. Lawrence River. Although the higher ranks of the congregation is skeptical, the teacher’s success with young people has earned him the freedom to conduct his research as he pleases. But the arrival of a new student - Emile, a troubled 13-year-old - soon upsets the delicate arrangement. Determined to convince his superiors that he can prevent the boy from dropping out of school, Jean embarks on a new mission as he doubles his quest for the evidence of the Vikings’ passage. There are serious consequences for Father Jean and the young Emile.

In 1948, Edith Piaf offered a Paillard-Bolex camera to Charles Aznavour, which would always be with him. “Documenting his worldly travels throughout his illustrious career, the celebrated French- Armenian troubadour hid a wealth of archival footage that when patched together in Marc de Domenico’s evocative documentary, Aznavour by Charles, showcases the crooner’s extraordinary gift of vivid expression.” (Hagan Osborne) Until 1982, Charles would shoot hours and hours of material which would become the corpus of his film diary.

When teenage Ibrahim lands his father, a brasserie oyster vendor, an unexpected debt, he resolves to do whatever it takes to make amends and gain his father’s respect. The story centers around young Ibrahim whose life is split between his father Ahmed (Samir Guesmi), a conscientious and reserved oyster seller in the brasserie of the French Royal Opéra, and his friend Achille from technical college, who is older than Ibrahim and specializes in illegal schemes. The friendship between the two boys results in shattered dreams for Ahmed who is desperately trying to recover his dignity by working on the restaurant floor but is forced to relinquish his goal to finance the bill for a theft-gone-wrong committed by his son. A true coming of age film.

Nominated for the Golden Lion for Best Film (Nicole Garcia) at the Venice Film Festival, Lovers, is a “noirish” romantic melodrama in chapters. Chapter One features the hedonistic Parisian love affair between Lisa, a beautiful hotel school student and Simon, a cocaine dealer to the bourgeoisie. Too good to be true, fate intervenes… and they meet again in Mauritius in Chapter Two continuing the raw passion that feeds the shattering climax of Chapter Three.

An edge of your seat thriller with Pierre Niney, Stacy Martin and Benoît Magimen bringing new evil to a “love triangle”

Charlène Favier’s debut coming-of-age sports drama tells the story of  a prodigious 15 year old skier, Lyz, (Noée Abita) who is drawn into an exploitative sexual relationship with her coach, Fred (Jérémie Renier). Beautifully shot in the heart of the French Alps at Les Arcs, Slalomfocuses on what the French call “emprise” the hold that one person can have over another. As her teammates reinforce the philosophy” he crushes you, you listen, you get better”, Lyz crosses boundaries that evoke other scandals in the athletic world that have made headlines in recent years. Lyz’s nonstop feeling of uncertainty, breaking her body in order to succeed, amount to a bittersweet victory, a testimony of her incredible drive and resolve.

Nostalgia undercut by tragedy, François Ozon seduces audiences almost as brazenly as he did in the 2003 “sizzler”, Swimming Pool. Set to premiere at Cannes 2020 pre-Covid, Summer of’ 85is a breezy first-love flashback to more innocent times. “The nostalgia here is undercut by tragedy, though no virus is to blame in what feels like Ozon’s response to “Call me by Your Name” - his own effervescent account of two souls who found one another for a single reason, and how that shaped a young man’s sexual identity moving forward.” (Peter Debrufe, Variety)

A ”labyrinth of love,” Love Affair(s), was nominated for five Luminère Awards and 13 César Awards. Emmanuel Mouret’s new film highlights romantic entanglements in an emotional tapestry of characters all in a diverse set of situations that according to Mouret “allowed for complexity… and in my mind, cinema exists to celebrate complexity. It is a story with stories, parenthesis within parenthesis… I like the idea that two characters could create a new relationship with one another by sharing stories of their pasts. I wanted a funnel-like structure, where all of a sudden the different tales converge into one.” (Ben Croll, Variety)

Love Affair(s)is clearly indebted to the work of Eric Rohmer playing around in similar philosophical territory – exploration of love, fidelity and fate.

Algiers, 1956. Fernand Iveton is arrested in his factory, accused of having planted a bomb. A true story of revolutionary conviction and romantic passion. Lacoste plays real-life communist dissident Fernand Iveton, who on a brief trip to Paris for medical tests, falls in love with Hélène, an escapee from an oppressive regime in Poland. They marry and move to Algiers, where Fernand came of age among Marxist radicals. As the revolution explodes, Fernand throws himself into the Algerian resistance, while Hélène, aware of the suffering she witnessed before starting a new life, must come to terms with just how much her husband is willing to sacrifice.

Official selection of the 2020 Cannes International Critics week, Skies of Lebanon combines live action with animation to create a vivid picture of Lebanon, inspired by the family history of filmmaker Chloé Mazlo. Young Alice (Alba Rohrwacher of Happy as Lazzaro) can’t wait to leave Switzerland in the 1950’s for Lebanon. Falling suddenly and completely in love - “un coup de foudre” with Joseph, (beloved Lebanese actor Wajdi Mouawed, author of the playIncendies, which was the source of Denis Villeneuve’s 2010 film), an obsessed astrophysicist whose one dream is to send the first Lebanese into space. Alice finds her place in the immediate family and leads the perfect life until their marital bliss is ripped brutally apart by the civil war in Lebanon…