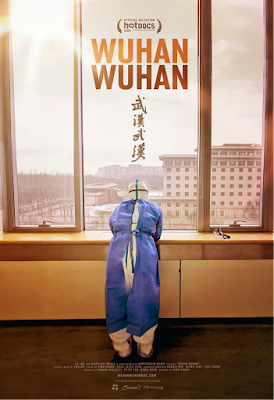 Director Yung Chang's WUHAN WUHAN is coming out with a potential chip on its shoulder.  The latest in a growing looks inside the city of Wuhan in the wake of the covid pandemic, it is almost certain to be compared to other films on the subject. The best thing anyone who sees it can do is simply attempt to take it on its own terms.

That is probably a weird way to begin a discussion of this film, but it is a necessary evil borne from the fact that when the film ended my first thought was "If I had seen his first I would have thought this was the best of the bunch" Clearly timing is everything.

WUHAN WUHAN follows several story lines, healthcare workers trying to battle the disease, a couple expecting a child, a psychologist trying to come terms with what is going on while trying to help others as well as others. It's a broad spectrum of life in the city that lets us know what it was like in the city at the epicenter of it all.

I was moved. More than once I was brought to tears by what I was seeing. One can never see too much what it was like to deal with an illness no one really knew anything about  but which was laying low thousands.

The strength of the film is the multiple story approach. Where 76 DAYS was largely set in a hospital and where IN THE SAME BREATH was focused on how China sought to control the narrative, WUHAN WUHAN wants to give us the big picture. This is what it was like for everyone across the board.

The truth of the matter is that WUHAN WUHAN is the film one should start with if one wants to know what was going on in the city. This is the overview that puts things into a basic context. Coming at it from after seeing several other films I couldn't help but nitpick and wish it covered things more deeply. Its a feeling that isn't fair because it was never designed to do that. Make no mistake WUHAN WUHAN is a great film, though how great will be determined by how much you have seen on the crisis in the city.

WUHAN WUHAN is recommended. It is also a must see if you haven't seen any other film on the subject.