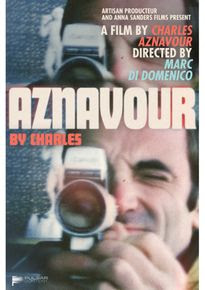 In 1948 Edith Piaf gave Charles Aznavour a movie camera and told him to record hat he saw. He continued obsessively recording his life on film until 1982.  A few months before he died he showed the film reels to Marc di Domenico and asked if there was anything they could do with the film. They then began to fashion a film about Aznavour's life which was finished after the great one passed.

Containing moments of poetry and magic AZANVOUR BY CHARLES is a must for any fan of the great singer and actor. While not a be all and end all biography, something it was never intended to be, it is a beautiful portrait of world superstar who always remained just this regular guy at heart.

Made up almost entirely of footage shot by Aznavour, the film begins with the story of his early life. Repurposing footage from later on to illustrate his early years film eventually meets up with the cinematic present as it follows one man's life on a personal level. His wives and children and friends are all here, including Piaf who had to approve the young woman who would become Aznavour's second wife, lest he immediately dump her. The soundtrack is a selection of the music Aznavour wrote mixed with the words of himself and his wives spoken by others.

There are some truly magical moments as Aznavour's words and his images come together to create some truly transcendent moments.

As much as I loved the film, I am well aware that this film may not play as well if you don't know Aznavour. This is not a flaw but a statement of fact. While the film will let you know about the man it is not going to tell you abut his many film and TV roles, nor about all of the songs he wrote nor will it let you know what it was like to see him live (I saw him several times and it was magical despite not speaking French). If you don't know the superstar you may not know why there was a film about this guy... On the other hand if you know the superstar you will understand that the big name was ultimately just a guy.

A must see for any fan of the great man , I suggest that anyone who doesn't know him give it a try as well because ultimately its a beautiful portrait of a man in his own words and images.