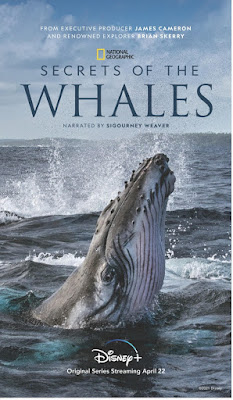 SECRETS OF THE WHALES is a four part documentary series from Disney+ and National Geographic which is all about whales!  I loved it!

Part 4: Sperm Whales (who have the largest brain of any mammal! 6 times that of a human!)

The series is narrated by Sigourney Weaver and we also hear from National Geographic photographers and experts.

The series goes all over the world to show the different areas whales live in, from New Zealand, to Antarctica, to Norway, to Alaska, to Dominica, to Canada and more.

Each episode shows the unique ways they get their food, and what their diets consist of, how they communicate and interact with each other, the sounds they make, how they take care of their babies, and how they grieve when a calf dies. We also see the long journeys they make, and their threats in the ocean.

I learned so much from watching the series. We are lucky to view things that had previously never been documented before (such as how a sperm whale nurses). It's fascinating that they were able to capture so much.

Did you know that Orcas are the biggest predator in the ocean? All of the other whales species have to be careful of them, but they've never attacked a human. In  a captivating moment in Part 1, an orca drops a sting ray to a National Geographic diver. It was willing to share its food with them. They made a joke that maybe they thought he was a skinny orca.

A very important piece that I'm glad was mentioned is the danger of finishing nets and the threats they pose. Nearly 1,000 whales, dolphins and purposes drown every day from being tangled in them. But this documentary didn't lecture about that (note: watch Seaspiracy if you want to learn more about that)

I really loved this series. The images and music were beautiful. It was beautiful seeing the whales work together, even when they aren’t family, they work together, like old friends. The series is appropriate for both children and adults. I learned so much.  I can fill this review with a lot of facts, but I don't want to give away too much. I think it's best for people to experience it themselves. I will say, my favorite part was the amazing story of the beluga whales and the lone narwhals, it even made me teary eyed. I really can't say enough about this wonderful series.