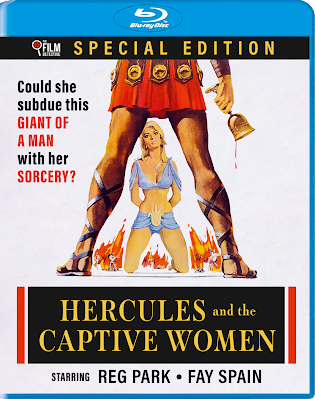 There is a running battle between Ken, one of the founding writers of Unseen Films, and myself concerning Hercules and the Captive women. Ken absolutely hates the film and can not understand why anyone would ever want to see it. His opinion is based solely upon the Mystery Science Theater 3000 episode which roasts a very cut version of the film. Ken was always puzzled as why anyone would want to bother with the film when it was so bad. I of course loved the film, it’s actually one of the best sword and sandals films, especially considering that the entire MST3K episode runs 90 something minutes when the full version of film runs 102 minutes which means that probably a half hour if not more was cut from the film.

The film has Hercules trying not to get involved in the events that are causing strange weather in Greece. Kidnapped and sent off to sea Hercules and his son eventually end up in Atlantis where he battles the evil queen and ultimately causing it’s sinking.

The film is a blast and aside from the now infamously regrettable line about the “blood of Uranus” isn’t as clunky as the MST3K episode would lead you to believe.

Those of you wanting to see what the film really is  all about should make an effort to get the special edition that Film Detective has put out. A beautifully restored version of the film that is the best way to see the film short of tracking down a copy of the film in Italian. This edition is so good that I can finally get rid of all my other versions of the film.

The real reason to get the film, beyond a gorgeous looking edition of the film, are the extras. Two of them the film Hercules and the Conquest of Cinema: A Swords and Sandals Documentary from Daniel Griffith at Ballyhoo Motion Pictures and the commentary track by film historian Tim Lucas  are so good that they need a second or third viewing before I give them their own entry.  Seriously between the two you will get a new appreciation for the genre and the films that make it up. Additionally MST3K’s TV’s Frank, Frank Conniff gives us a sweet introduction to the film and as an added bonus Film Detective has included the MST3K episode so you can compare what was chopped out of the film to make it into a yuck fest for Joel and the bots.

This is a great film and a great  presentation. Highly recommended

Email ThisBlogThis!Share to TwitterShare to FacebookShare to Pinterest
Labels: action, swords and sandals