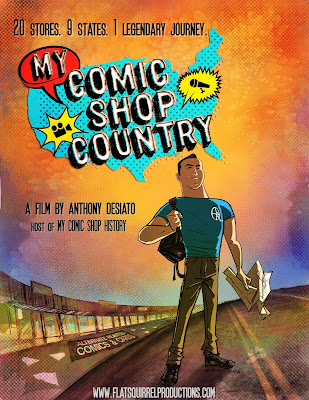 If you love comics or if you’ve ever hung out in a comic shop then you really need to see Anthony Desiato‘s MY COMIC SHOP COUNTRY. The film is a glorious celebration of not so much comic books, but the people and community that they bring together. It follows director and podcast host Desiato as he travels across the country to visit 20 different comic shops to talk to owners, shoppers, and comic creators about everything that makes comic book shops so cool.

Part of the love comes from the fact the film made me reconnect with a whole bunch of my comic loving crazies. Right after I started the film I was stopping the film to make a long distance call to my friend Ken to find out if the Las Vegas shop was his shop. And then not long after that I was calling John and Randi to tell them that their favorite comics shop Escape Pod in Huntington NY was in the film. As more shops were visited more calls happened as I called up friends to say “hey remember when we went to ----? Well it’s in this movie”

A good part of the film involves a discussion of the economics of the comic industry. As someone who has danced in and around comics all my life I finally got a peak into what it takes to run a comics shop beyond being just plain crazy. It was something I was always curious about and now I know. If you ever wanted to understand what it takes to run a shop and do it well, this film will tell you. While it may be too much for some for others it will be a reason to go in and hug your comics person for making it all work.

Mostly what I love about the film is that the film beautifully shows us what the comics community is at its best. I love how we get a sense of a place that people can go and hang out. As someone explains it was a place where he could go and hang out and be with people and the older kids would talk to them about something they loved. I love that the film shows us that what makes the comic shops work  which is a sense of family. Desiato gets it right.

And I have to give Desiato a hand for including a discussion of women in comics shops. While part of me wants to ask him why he didn't go into a bigger discussion, I realize that ultimately that a discussion of the comics shops and women needs to be an entire film. For now I will happily take his discussion as part of the bigger picture of acceptance of everyone.

While I love this film and its reflection of comics culture, I’m not going to assume how this will play for people who are not comically inclined.(The films one real flaw is that it can be a tad insidery at times).  That is not a knock but more a statement that I am too far into comics to be able to adequately judge how someone who is on the outside will react. Hopefully this will bring more people to the fold, or at least give a greater understanding to those who are don’t know what to make of us crazies who love comics.

Highly recommended for anyone who loves comics. Definitely suggested for everyone else.

This is one of the best comics docs I’ve run across.