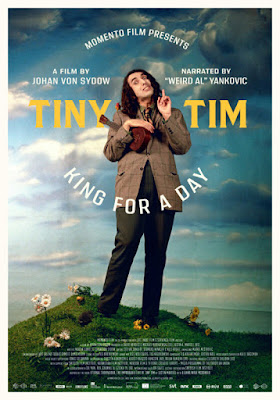 Portrait of Herbert Butros Khaury aka Tiny Tim as told by the people who knew and loved him. It is a trippy film with a strong sense of melancholy. This is a film that finally reveals who Tim was and will make you wonder at his ability to survive through decades of up and downs (a lot of downs)

I am old enough to remember seeing Tiny Tim on the original run of Laugh-In as a small kid. There was something about him that seemed kind of off. His performance walked the fine line of being a joke and being seriously good. Even as I kid I could tell there was a talent there but that sometimes it was misdirected- I mean some of his covers were just weird. He never became something I really was interested in thinking of him more as something kitchy.

But while some people considered him a joke or something that could only have happened in the 1960’s, Tiny Tim survived and continued to play concerts until his death in 1996. Few, his family and friends excluded, gave him a second thought, and that’s a shame.

Viewing KING FOR A DAY is a hypnotic experience. I am going to guess most people will be like me and go in for the freak factor, but will come out with a basket full of sadness and huge package of respect for a guy who did his own thing and never gave up. About half way into the film I was not only floored by the fact that I was still watching the film, but that I was completely engaged. I was hooked by the twists and turns or Tim’s life and totally amazed he was not totally crushed by it all.

That the film works as well as it does is due to the love and respect not only of all the talking heads who sing Tim’s praises but also director Johan von Sydow who has crafted a film that genuinely moves you. von Sydow brings us into Tim’s life and makes us realize that even though Tim was one of a kind, he was no different than us.

The film is a stunner. I know that may sound weird, but it’s true.