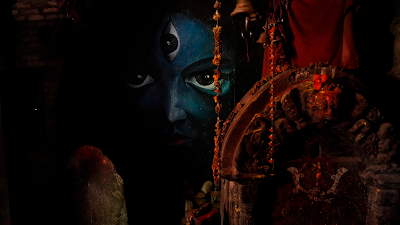 Tenzin has been having strange dreams and visions of a young girl. Sometimes she is in a field of flowers and sometimes not. He is so haunted by her he is having trouble focusing on finding a place to open his coffee house in Kathmandu. A friend of his says it maybe an omen and after consulting with a monk Tenzin is told he has a week to live. If he wants to avert his fate he must find a certain kind of mystical being.

As unwieldy as my explanation of the plot is, the reality is this is a smooth flowing spiritual quest of a film. Putting us in a particular place and particular time, we are travelers with Tenzin on his spiritual quest for enlightenment, or at least a reconnection to the world.

As much as Tenzin is desperately trying to find the "lady with the fangs and a moustache" he is also on a quest to reconnect with the world. Everything in his life is focused on making money. What will be the best place for his coffee shop?  Never mind that it is an abandoned, but still holy temple, maybe that will do. And maybe, perhaps the goddess cursed him as a result, or maybe he just ventured too far into the world of the yellow haired people. His drive to making money is stepping on toes and beliefs an whether gods are real or not he is bumping into things people hold dear.

Beautifully shot by Mark Lee Ping-bing (In the Mood for Love) the film is a love song to the world with everything, every moment being perfectly rendered. This is life in balance even if Tenzin's isn't.

Director Khyentse Norbu, a Lama himself, has fashion philosophical journey that melds Nepalese thought with the modern world through a beautifully written script that he has augmented with a kick ass music score. Traditional songs meld with music from people like Tom Waits. And a small thing that I love is that Norbu doesn't use pieces of songs, but more often than not he sets an sequence to one song. It's a small thing but it is vitally important to keeping us in the moment.

As with Norbu's earlier film VARA: A BLESSING this is a film that you need to see rather than read about. It is like a looking at a picture of a fabulous place. To be certain the picture can show you the beauty but it can't make you feel what it is like to be physically there, especially after the journey to it.

LOOKING FOR A LADY... is a stunner and highly recommended. It is one of ym favorites of the year. 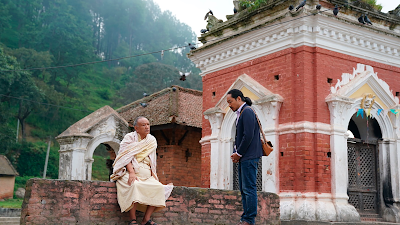