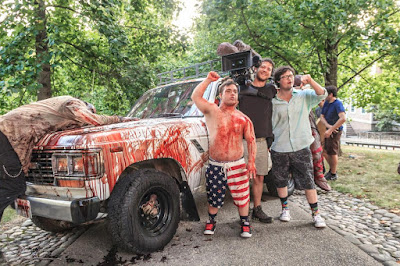 Sam Suchmann and Mattie Zufelt, who both have Sown Syndrome,​ met at the special Olympics and bonded over their mad passion for film. Their enthusiasm was such that they managed to convince a whole lot of people, including Oscar winner Peter Farrelly, that their film SPRING BREAK ZOMBIE MASSACRE was something that had to get made. Director Bobby Carnevale charts the course of the project from conception to Conan O'Brien.
If you want to see a film about the joy of filmmaking and films in general, this is it. Sam and Mattie and everyone they touch are having the time of their lives making a film because they have to. Their passion to make a film and make sure that it is their vision is infectious and you understand  why and how they managed to get their film made.
While the film is full of behind the scenes footage and most of SPRING BREAK ZOMBIE MASSACRE, what sells the film is the portrait of the two crazy guys at the center. Sam and Mattie are just insane. I say that in a good way. They are guys you want to hang out with. I suspect that there are going to be people who will say that the film came together because they have a disability, however the reality is the film came together because you can't help but like the guys.
While I could complain that this film is a bit too long, that's merely nit picking on my part. It's the film writer stepping in where he has no place. The reality is that SAM AND MATTIE MAKE A ZOMBIE FILM, like the film it charts, is a blast because it is alive with great characters and and a lot of people who come  together to do something which is really cool.
Highly recommended.
Posted by Steve Kopian at April 09, 2021