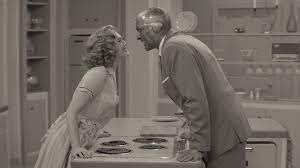 I’ve given up on the MCU.

It’s not that I don’t like the films or the product but I unlike many people I have a life and I like other things and I don’t want to be tied down to all of the series that they are pumping out on Disney+.  I’m sorry if that bothers some people, say the people at Disney, but life is more than superheroes, specifically more than Marvel superheroes.

This sort of ties into the notion which is slowly changing in the minds of many people which is animation is more than Disney, Pixar and Ghibli. There is more to cinema than a few studios. I know Disney would like us not to think that way but since Cartoon Saloon, Netflix and the rest of the world are turning out films light years above the typical Disney product I’m happy to piss them off. they need to work harder since they are not the only game any more an people know it.

But I digress. Part of walking away from the MCU is that I simply don’t watch TV series. Okay yes I do watch the NCIS series, but that is a hold over from watching them with my dad, so they don’t count. Mostly though if I do watch a series I will binge it. I will watch a season at a time. I have done it for decades, where I would record a whole bunch of episodes and watch them all at once. I can’t budget my time to spend half an hour or an hour every week for anything. I am forever time shifting, or missing episodes along the way.

That may be fine with series that don’t tie into other series and movies, but the way the MCU is going you have to watch it all, and watch it closely because key details for later films or series are small details in the current one.

Who has time to obsess?

More to the point why the hell would I focus on just the MCU when there is so much more out there. Never mind the various DCU films, what about the regular films and TV series? Why wouldn’t I want to try something else? Why wouldn’t want to get a different perspective of life? Let’s face it the fact that I am living in the inde film world says a hell of a lot. I love that almost all of the filmmakers are not looking at the world the same way. I love that I am not getting a corporate view for everything. I also love that I am getting a beginning a middle and an end, not an on going never ending tale of sturm and drang about archetypes.

This isn’t to say that I won’t watch the movies. I truly am interested in the feature films, I mean they tend to be great fun and they are characters I love. However the films only come out now and again. Yes there will be multiple movies this year, but at the same time they are all one and done. I don’t need to come back week after week….

Except that Disney and Marvel are making it so that over time you will need to have seen all of the series. You will have to have seen the Netflix series (hey characters are carrying over) and the ABC series, and the Disney+ series and every god damn film. Its going to freaking kill the cash cow because there is going to be a point  where its simply too much to catch up on. Trust me I know only having seen a few episodes of the Netflix series years ago, I am shaking my head at having to go back and see what I missed there and on ABC.

In all honesty if you look at the long running series in cinema history you find that the ones that worked best and lasted longest always had an easy way in in each episode and but also moved the characters forward.  Almost always once things got complicated people tuned out the series died. I know many people I know will argue I’m wrong one need only look at something like the Matrix series. While everyone was excited for the second and third films before they came out I don’t know anyone who watches anyone but the first.

While Marvel  and Disney are going to work hard not to over produce there is a point where things are simply too complicated to  bother with. I suspect that they are bordering on that now. I honestly think that they are damn close to turning out a product which is the equivalent of the Thor films- films that don’t really exist for any reason other than to get you into the next Avenger film. I hate the Thor films simply because they can not stand on their own and have stories  hobbled by the need to make the audience go to the next film.

Because Marvel and Disney is just trying to get my cash I’m walking away. While this  will probably mean I like their films less and less because I don’t have the background, that’s okay.  I just don’t need that much Captain America in my life.

Leave it to Beaver is an awful show full of terrible characters. While I was never a fan of the show and have a avoided it like the plague over the years, recently I have been watching bits of the show again since it is on in the morning when Im getting ready for the day job.

Honestly I am shocked that it ran for six seasons.

Never mind asshole Eddie Haskel no one else on the show is too bright. Dad is kind of loving but clueless. Mom is subservient. Wally is okay in a wishy washy way but self centered. And as for Beaver he is an absolute moron. Watching him go through his paces one can’t help but think that he is developmentally challenged. He has no real world experience and does stupid things over and over again. Yes I know it’s for the show but he is so backward that he would be in special programs if he was school now. I find it nigh impossible to watch it simply because no one can be that stupid. What’s worse is he is so consistently stupid that he’s impossible to watch.

How did this show survive for as long as it did since its all about really stupid people?

I can't believe the same people did the first film.

While the film has moments in the final half hour or so and an excellent performance by Chris Pine, mostly it's wildly overlong unfocused rambling mess, that largely plays like the worst episode of a bad TV superhero show.