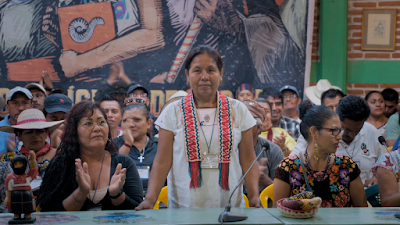 THE SPOKESWOMAN is a portrait of  María de Jesús Patricio, aka Marichuy, the First Indigenous Woman to Run for the Mexican Presidency.

Patricio's rise in the political ranks was not something she had expected. She hadn't expected to  become a political leader but her ability to stand up to her bosses made her someone the people around her turned to to help get things done. As she began to fight for the promised rights of the indigenous people of Mexico, rights that were promised and taken away over and over again, she became a face most people knew. As a result she was the perfect person to step up and make a dark horse run to lead the country.

And then it hit me somewhere about half way into the film. While we are listening to the words of Patricio and those around her we really aren't seeing them speak. Its all voice over, except for the odd speech or interview. We don't see many people actually speaking on camera. It wasn't until I started to notice all the people with face masks on that I realized that there clearly is a safety issue for many people. Basically many people can not speak on camera because it could be dangerous. While I completely understand why this is so, it still makes it difficult fully connect to the film.

Reservations aside I still recommend THE SPOKESWOMAN as a vital portrait of a fight for basic human rights.