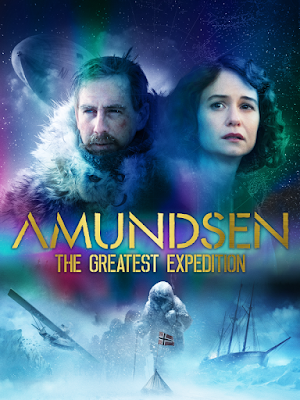 AMUNDSEN THE GREATEST EXPEDITION is a complex portrait of the legendary explorer told in flashback. As the film opens Amundsen has gone missing. He had taken his plane up in what would be a vein effort to save Italian explorer Nobile who had crashed over the North Pole in a dirigible. Where Nobile would find his way back to civilization Amundsen and his co-pilot would disappear into the frozen void. In his home his brother and fiancé discuss the man and his complexities.

Amundsen was man driven to explore. He pushed himself and others hard and while he made it to the South Pole first and achieved many other feats, he was not an easy man to get a handle on. The result was a man that most people who liked and loved him didn’t really know.

From a cinematic standpoint this gives us a main character that we like more than love.  I personally admire him but I don’t know beyond that.  Normally this would doom a film in my eyes, but in this case we like the people around Amundsen so we are willing to give him a pass of sorts. Actually in my case it made me lean into the film a bit more. While I know why his brother hung around him, I was curious about Bess Magids, his fiancé. What did she see in him that she went along with his self-centered isolation? While I don’t know if I have answers I know that the film gave me a great deal to ponder.

I’ve always been curious about Amundsen since I saw Sean Connery in The Red Tent  at the drive-in in 1973 (when it played with Snoopy Come Home). I had to know who this person that James Bond played.  AMUNDSEN THE GREATEST EXPEDITION at least gives me a some cinematic answers. Or if not answers some kick ass and frightening sequences of the trials and tribulation s of the great explorer. If he was one of a kind, his adventures clearly made him that way.

I really liked AMUNDSEN THE GREATEST EXPEDITION. It’s a wonderful atypical biopic that gives us thrills , chills and lots to ponder.