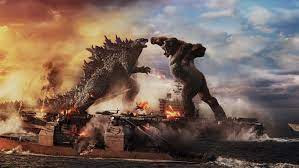 I was a kid who grew up on Godzilla films, and salivated every time  one of the original ones hit TV or theaters. Any time they were on I was right there in front of the TV.  I loved them so much that some of the first films I rented on VHS and bought on laser disc and DVD were Godzilla films. Watching the films I'm six years old again and I am lost in a world somewhere else.

SO the answer is yes I loved the GODZILLA VS KONG. My inner six year old was openly weeping during the finale as the battles I waited five decades to see finally were happening right there on the big screen. It was only made better being their with friends (Stan and Eric) and my brother Joe and my niece, who never saw a Godzilla film before but fell in love with him and Kong tanks to this film. In all seriousness I delighted in her beautiful explanation of the film and why she loved it on the ride home. I wish I recorded it but I was smiling too big to even think of it.

The plot has an evil corporation looking for a way to the hollow earth so they can find a new power source to rule the world. What they are really doing is building a mecha-Godzilla and want to take over the world. They need Kong to show them the way because Godzilla is constantly trying to stop them. Lots of battles result.

As an engine of destruction this film kicks ass and takes names. This is a battle six decades in the making since the first time they clashed on screen. The filmmakers have all sorts of riffs and refences to that first meeting and if you know that film the references will delight you.

This film is as perfect a visceral engine of carnage and joy as you can get.  As I said there were times during the Kong /Godzilla battles when I was crying from joy. All of the big dust ups will have you going wow repeatedly with turns you never saw coming.

That said I still have issues with the film. The candy colored Hong Kong aside the films problems are in the script. I suspect that the problem is that in cutting the film down for pacing lots of details went. The result of the details missing is a film that just kind of hangs there until you're 20 minutes in.

The film kind of removes Godzilla as having any sort of personality. You kind of need the last two Godzilla films to have any sense of him as a character.

Actually outside of Rebecca Hall's and her adopted daughter's character no one really has a character except in the briefest of short hand.

We need more information on the Ghidorah skulls. Didn't Godzilla eat 2 in the last film?

What exactly happened with Skull Island, there is a stray comment about a perpetual storm- but even then how did Monarch build a containment area for Kong in a storm?

And there are more tidbits that feel left out and I keep thinking that with another ten to twenty minutes of exposition the film would be my most favorite film in the world. You'll forgive me I was too busy watching the film to write down all of them

But my quibbles are pointless since all that matters is the action and on that level its perfect.

Frankly at this point I expect the series to implode since the film effectively shakes off the seriousness of the first two Godzilla films and instead goes balls to the wall crazy. Think of it as the DESTROY ALL MONSTERS moment in this series. In the original run that was the point when the series started to get a bit loopy. I still loved what followed but after that we got some silly freaking films (GODZILLA'S REVENGE anyone?)

Highly recommended GODZILLA VS KONG is a must see- especially if you can do so on the big screen.