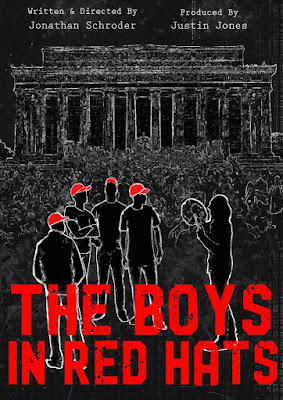 Covington Catholic alum Jonathan Schroder looks into the way the media covered the incident at the Lincoln Memorial where Nick Sandmann became the object of vilification when an edited video of him and others from Covington seemingly smirked in the face of Nathan Phillips, a Native American activist. The video made the rounds on the various news outlets and caused an uproar until it was discovered the video had been edited. Schroder looks into why and how it happened, the aftermath and what it all means.

THE BOYS IN THE RED HATS is a tough film to get a handle on. Because the incident at the center of the film was, and still is, politically charged odds are you are not going to get a film that approaches your expectations going in. You may not have a handle on it coming out either. Even having watched it I still don't know what I think of it or what it all means. Schroder most certainly unravels what happened but he throws in other bits that challenge us, just as it challenges him, but he also ends up confusing us as to his intent.

Schroder's feelings about the high school he attended are complicated. He was someone who was invited to the school simply because he could play football well. He had no connections to get him into the school unlike most of the rich kids who went there. Attending it opened doors for him and even got him his first job no questions asked.  He has a warm place in his heart for the school. But he also understands why people hate it. He understands how the smirking student body, a tactic that developed as a way of fighting back at those who hate the school, causes people to despise his alma matter. He himself  loved the school for most of his time there, only changing some of his feelings when a teacher hauled off and punched him in the face as punishment. The act altered much of how he felt but it never fully extinguished all his love of the school.

The complexity bleeds out into the film as we get conflicting lines of narrative from Schroder. Its most obvious when he talks about Covington. At times he loves his old school at times he doesn't. He sees problems there but likes how it can create good young men. The trouble comes is that duality invades everything. We see everything from both sides until we don't. At times he seems to be against the sort of privilege that Covington affords students and then he kind of is for it because it helped him. Schroder doesn't like Nathan Philips at the start, then seems to warm to him at one point, talking of friendly emails and texts, before turning against him in the end. What are we supposed to feel? What are his real feelings?

And that is another big problem with the film and that is, for all it's complexity, is very unfocused. Nominally the film is about the encounter that was misrepresented on the news. However the story of what happened isn't a grandly unknown quantity, the matter has been discussed in various outlets and forums. Indeed about only 20 minutes of screen time passes before we are largely done with the subject so Schroder dives back into the culture of Covington, his feelings for the school, the politics of race, who Nathan Phillips is or is not, and his efforts to make the film and to get people on camera such as Sandmann and Phillips. The result is the film swings from pillar to post.

As I was watching the film I felt more than a bit over whelmed  trying to keep up with where Schroder was going and wondering why he was doubling back on things. As much as I was liking the fact that he was saying things that needed to be said about how events are covered, he kept mudding the waters by repeating himself, going off on tangents and seeming to suddenly change is mind or take an overt political point of view that seems to come from left field. I got to a point somewhere around mid-film when I threw up my hands and screamed at the screen in frustration. I didn't know what he was trying to say other than in fleeting moments, and even then he would just contradict himself.

Honestly there is something here, it just needs a different editor

Is THE BOYS IN RED HATS worth seeing? I honestly don't know. Sometimes I think yes and sometimes no. The best I can say that any film that is as all over the place as this one is worth a look since you might find something that clicks with you.