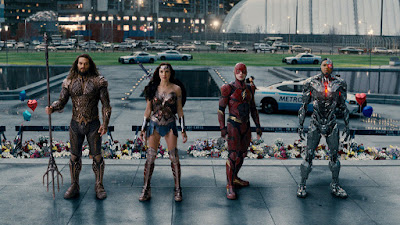 Zack Snyder's cut of JUSTICE LEAGUE has hit HBO MAX and the fans rejoice. (Though apparently there maybe more to come with a black and white version just released and stills from scenes not included promising more scenes.) I'm not going to recount the plot since it is basically the same as the theatrical cut. The differences are the reason to watch it.

The question everyone is asking each other is what did you think?

I loved it. I genuinely like the theatrical but but I loved this version. It had  me misty at times....

…and it had me groaning in pain as it got somethings terribly wrong. Yea, for as good as somethings are others are awful.

One of the things I like about Justice League is there are many moments that transcend the superhero genre to the point of becoming glorious in their own right. Small moments between characters shine, Ma Kent running to see her reborn boy, the women singing on the edge of the sea when Arthur leaves and many others lift the film up.

I also love that there is a real sense of loss and danger. More so than the Marvel films there is a sense that people will die and stay dead (unless you are Kryptonian). There is a weight to the proceedings that runs through Snyder’s films from the opening of BATMAN VS SUPERMAN when Bruce Wayne is horrified by the death of thousands via Superman and Zod’s battle on through the death of Victor’s father in a sacrifice that allows the team to find Steppenwolf what happens has a cost. We know we are not in a comic world and as a result we root for our heroes more.

Even in the foreshadowing of a future where Superman has gone to the dark side things are not going to be okay, things are going to go wrong.

Of course that’s true too in the film itself. As glorious as the film is over all there are problems. The CGI is uneven, some sequences such as the Amazons trying to keep the motherbox from Steppenwolf, while exciting and very close to a comic book sequence in the wrong sort of way so it comes off as  much too silly. The slo-mo is wildly over used. And the pacing is uneven.  And there are other hiccups which, while never fatal in my eyes, make me completely understand why some people don’t like the film.

The problems with the Justice League universe are going to come when, and if, Zack Snyder tries to continue the Knightmare/Darkseid  storyline. My intense dislike for the New Gods aside (don't get me started) Snyder has created all sorts of probable story problems that have me shaking my head and not looking forward to anything that follows in this direct line of plotting.

The first problem is that in showing all of the armies coming together to take on Darkseid to defeat him the first time, throwing Batman and his band of mazurka players at him when he comes back is going to seem silly. In all seriousness a small band of superpowered humans taking on huge band of super powered aliens is silly when all the armies of earth, space and the gods had to do it before and barely won, so now a handful of humans are going to do the same thing- and survive. Unlikely, especially since Darkseid is supposed to be this ultimate bad ass who conquered galaxies. They are making him the ultimate boogey man-except he's not for some unknown and probable stupid reason. And his armies should be genuinely dangerous and capable of fighting as opposed to the mindless parademons. This is video game plotting.

There is all sorts of problem with some of the details in the grand plot- such as Darkseid not coming back to earth because he is afraid of the Kryptonian when you consider that millennia passed and he didn't come back and there was no Kryptonian on earth. The humans now have the mother boxes and have a vague idea how to use them so wy can't they do something that would work against Darkseid.

Let's face it there are real issues with the godlike powers of Superman. Why is Darkseid afraid of Superman,  when the Gods- the literal gods- came to earth according to the film to fight Darkseid and he damn near shrugged them off? This  is more than a bit bizarre especially since there is the odd reference about Diana being a god- so we have to ask what are gods in the universe anyway? Why is this one Kryptonian so dangerous? And do I even have to go into the whole thing about Superman only having super powers because of the power of our yellow sun. Again I ask why is Darkid afraid of the Kryptonian?

And then there is the whole issue of time streams and multiple worlds. I know that fans will argue he Krptonian ships argument about the future being set implies the end is coming, but at the  same time Flash messed with time after the future is set...and I'm sure he will again (hey isn't that the plot of the Flash movie?) so nothing is set.

To be honest the whole time travel trope is not now and never has been a plot device that worked for me. It always feels like desperation because it always allows a cheat of getting out of it. It almost always breaks my like for any film because using it not only feels lazy but creates so many logic problems when used multiple times and I can see it creating many issues  in future films.

A HUGE problem is that if everyone knows that  Batman will not protect Lois at the start, why wouldn't anyone tell Superman that it was foreseen and then everyone could just take steps to prevent it from happening? Additionally even if you know you can't change some of what is going to happen you can just take steps to stop other parts (kryptonite is on earth). Basically if the way to stop Darkseid is for Batman to die instead of Lois, and he and everyone else knows that going in, why doesn't he make the sacrifice to start with? Why inflict the loop de loop time travel nonsense- especially since Batman has changed and now talking about faith and seems to be less a stick in the mud? Why wouldn't he just fix the problem since he knows how to do it, I mean he's been specifically told in advance what has to be done. His not doing it makes the film a potential live action version of the Woody Woodpecker cartoon which has a narrator saying repeatedly " If Woody had just gone to the police none of this would have happened"

And lets face it, while the Snyderverse fans love the idea of his future films right now,  but they are going to scream what I am saying  about these plot problems down the road when they realize how simple the problem could have been solved.

I do have to confess that for all my bitching about the almost certain narrative problems in any sequels, I like the idea of a dark future-unfortunately I don't think that Zack Snyder can pull it off what he is planning without people throwing up their hands because he is formulating a plot that is going to crash from first look.

In all honesty if Snyder for some reason is allowed to make sequels he should radically rethink what he's going to do because honestly what he has in mind is kind of dumb (not to mention kind of similar to the Infinity War films with the time travel- and I won't get into the problems with those films' plotting) besides why give us what he already promised since that will result in no suspense since we knw how it will lay out.

As much as I like JUSTICE LEAGUE I don’t think Snyder can pull it off the proposed next two films. I mean who hell would want to go to the hellscape  he is proposing when he has foreshadowed so much in this film, not to mention revealing what was supposed to happen in the films when they were completely dead. I think his ideas while interesting, are going to end up with some sort of diminishing returns